It’s pretty rare when at a two-day event of the AIM Weekend Walleye Series, the same team wins both, but it was close at the North Dakota Division Warrior Boats/PurePowersports Open Sunday (July 10), Day Two edition, when the first and second-place teams from Day One switched places.

“On Sunday, Day Two, our two top teams from Day One flip-flopped. Alex Reslock of Devils Lake, and Jordan Omlie of Lankin came in first, besting Tanner Ouelette and Kade Lynch of Mandan, who took Day One,” said Denny Fox, AIM national tournament director. “Reslock and Omlie boated 34.44 pounds and $3,000. We had to postpone the start for about an hour due to a storm, because the safety of our teams is most important. Having two teams share the same spots in a double  is pretty rare.”

On Day Two, Reslock said, he was more concerned with avoiding finishing second two days in a row than winning. That woulda sucked, he said, and the two set out Sunday to make sure it didn’t.

“Following those, we caught a double, about a 24 and a 26 right when that pocket we were in started blowing up. Jordan set the hook and right when he was half-way in, another bobber went down. Jordan’s comes to the boat and it was the 26.

“I net that one and put the net down and he grabbed the other rod and it ended up being another 24-1/2. We got another 25-1/2 to fill our card, and then it pretty much went dead. Maybe we caught two more, and that was pretty much it,” he said. 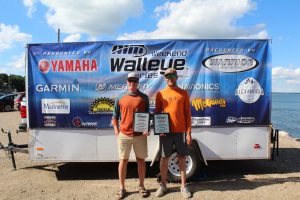 Back at the awards, he said they weren’t confident of a win. But it was getting another second that really worried him. But others were surer.

“Everybody was congratulating us and I said, ‘no, don’t say that yet.’ Because when you’re close but just not quite there, it sucks. Overall, I was happy with second the first day. I couldn’t be mad. Anytime you can weigh 25 pounds on Devils Lake that’s really good. And 34 is very doable but the stars kind of have to align, and you can’t lose any.”

Finishing second with 27.07 pounds, and taking home another $2,000 were Mandan’s Ouelette and Lynch. They again chose the lake’s east side.

“We were worried that the fish would be in a goofy mood because of the storm, and they were just not in there like they were before (on Day One),” Ouelette said. “We ground out seven bites and we had five of the right bites. It was just a little harder. Going into the last hour we only had 18 pounds on the card. Then we went pig hunting. With 30 minutes before we were going to leave, we marked a fish under a big laid-down tree. It popped my bobber, and it was a 26-3/4-incher we needed. 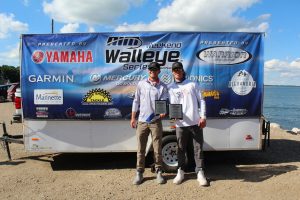 “We broke off on two giants that would have put us in the 30-pound range but that’s fishing. So, we had no fish to spare on day two,” Ouelette added.

Third place for Day Two went to Spencer Deutz of Fargo and Nick Deutz of West Fargo, who netted 26.45 pounds and $1,500. Zach Axtman of Rugby and Max Miller of Waconia, MN, who ended the day with 24.63 pounds, earning $1,000. Fifth and $600 went to Daren and Heide Schneider of Bismarck. 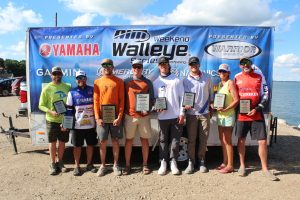 Yes, AIM is actually hosting four events from last Saturday to this Sunday. It’s tough work, but somebody has to catch’em, and it’s the kind of work we love. Follow all the fun Sunday on Leech Lake from Horseshoe Bay Lodge in Walker. And, you can still do it, too. Go to aimfishing.com to register and be part of the walleye fishing’s most lucrative affordable walleye series.