A trio of North Dakota anglers, Craig Kolden, his fiancé Shaeli Ekstein, and Ben Leidholm, all of Garrison on the banks of Lake Sakakawea, are the  AIM Weekend Walleye Series Yamaha Motor Corp. USA North Dakota Team Of The Year, finishing about 23 points ahead of the second-place team at the state championship this past Friday and Saturday on their home water, Lake Sak.

“Craig said they consider themselves, ‘easters,’ because they fish a lot out of their home in Garrison, but they made the drive and won it in that huge walleye hole called Van Hook Arm,” said Denny Fox, AIM national tournament director.  “They went home with a new Yamaha T9 9.9 four-stroke kicker worth more than $4,000 that Craig said will replace his old kicker, and they’re also going home with a shot at that new 1898 DC Warrior/150 HP Yamaha and Garmin electronics package that we’ll award at the 2023 AIM National Championship Shootout. Where? We’ll announce that in the coming months.”

“They beat out a stellar field of North Dakota walleye teams, but it wasn’t easy. Going into this, they were about four points to the good, but Van Hook provided, and they also provided a great finish to a fantastic season that began with a canceled-by-weather event on the Missouri in Bismarck in April, but made up with a double-header on Devils Lake in July. That was in addition to Ben coming in to substitute for Shaeli, when the birth of her and Craig’s daughter, Amity, pulled her off the water. Way to go, all three.”

Amity came along two days after the Parshall event, where the trio—Craig and Shaeli, with Amity also “aboard,” took seventh, starting their quest for that TOY title and that Yamaha four-stroke. Their first tournament of the year, they finished second. Then the second, in seventh. 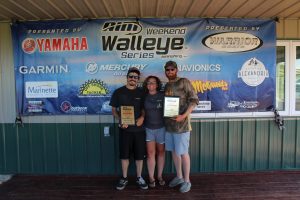 “None of this could have ever happened without my partners,” Kolden said. “They’re the most important tool. I run the boat and they run everything else, and they do the hard part. I do the easy part. And they’re the ones who catch the fish most of the time.”

The trio–plus one—were leading in TOY points going into launching at Hazen on the south side of central Lake Sakakawea. Their second place cemented that lead by 23.66 points. “We were only leading by four points going in so we knew we had to do something good. DH Custom Baits  of Bismarck helped us with all our needs. He’s getting pretty big and he deserves it,” Kolden said. They also wanted to dedicate their win to another: Leidholm’s late father, Kyle. Together, the Leidholms ran a Garrison-based construction company. “We wanted to do this in memory of Kyle,” Kolden added.

“We’re ‘easters,’ and it would have been great to stay on the east side of the lake and try do this,” he said, but it’s hard to resist the run to Van Hook, which naturally seems to be the place for walleye most of the summer on Lake Sak.

“It’s a small area that’s hot all the time. The fish migrate from the west and it seems like the bait fish like to collect in that area. They stay. We knew that. Since we were so good on points, we knew going west was going to be easier. The east end of the lake is for people who like the challenge. We went west both days” to maintain their lead, Kolden continued.

“We’ve been part of the shootout before, when AIM went to Chippewa Flowage (in 2018), and we’re excited to go to the nationals again. It’s going to be our vacation for the year,” said Kolden, who is a heavy equipment operator.  Ekstein works for the state. “Getting away from our normal life and going out fishing.

“I remember scrambling to find the AIM schedule and figure out if we could make it work when I was pregnant,” Ekstein said. “Bismarck was canceled, and we decided to have Craig and Benny do the Devils Lake events. We’re super excited. Craig is an amazing captain. His communications skills are wonderful. He never gets mad for missing a fish. I’m pretty sure it’s going to be me” at the shootout, she added. “Benny will help us pre-fish and as long as I can get out of work, I’ll do it with Craig.

“We’re going to give it all we’ve got,” Kolden added. “Every time we’re out there, wherever it’s at. We’ll do whatever it takes.”

Finishing in second in North Dakota TOY standings where the husband-wife team of Daren and Heide Schneider of Bismarck.  Their fifth at the championship secured their Shootout spot.

This will be their third Shootout appearance in a row, in their Mercury 350 Verado-powered, Garmin-equipped boat. 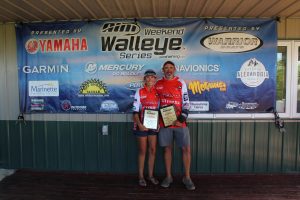 “This was a good season for us,” Daren reflected. “We cashed checks in three of the five events. Our goal was to make the nationals. It felt really good going into the championship knowing we had a really good shot to make it.”

The Schneiders finished first at Lake Ashtabula, 17th at Parshall, seventh and fourth at Devils Lake, and fifth at the state championship.

“Our fields in North Dakota are a little smaller, but there’s still a lot of competition. For us, it’s consistency. We make sure no matter what, we have a full card, and keep grinding till the last minute. Every single ¼-inch. Every single fish,” he said.

“Last Saturday, Heide lost one. We didn’t get to see it but she knew it was a very big fish. That could have changed a lot. But we fished clean all year. We fished consistent, with teamwork. The way we fish together is not like I fished with anybody else,” he said. And, they’re ready to go where they need to and compete in the Shootout.

“When we went to Wisconsin, we had a great time and got to meet a whole base of different people. We went to Minnesota and it was great to do something different. We don’t care where it goes. We’re up for anything. The challenge is always welcome, competing against teams on their home turf, and still holding our own,” he added.

Here’s the rest of the official field who qualified for the 2023 AIM National Championship Shootout. In third, Cody Cerkoney of Belfield and Cody Dukart of Dunn Center. Fourth place is occupied by Tanner Ouelette of Mandan and Kade Lynch and Brett Blees of Bismarck.  In TOY fifth, Ross and Roger Grothe of Baldwin. Sixth, Shawn Hennings of Hillsboro and Ben Blegen and Hunter Hennings of Milaca, MN. Seventh, Jeremy Wentz of Washburn and Don Radke of Williston. Eighth, Matthew Liebel of Williston and Tory Hill of Minot. And in ninth, Matt and Mitch Lang of Turtle Lake. 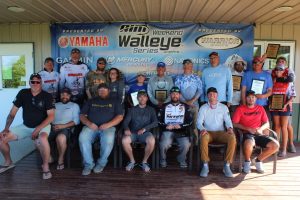 North Dakota Team Nation, those are your Team Of The Year finalists. We’ll have a complete roster of TOY teams from each state, and how they qualified to wrap up a highly successful 2022 season. 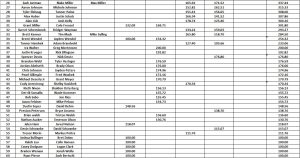 Ready to start 2023? At AIM, we are rarin’ to go, too. Participating in an AIM event is one of the most rewarding things you can experience as a tournament angler.

You get to catch fish. You get to release them back into their home water after using AIM’s Catch-Record-ReleaseÔ  system that preserves the very resource you love to catch.

It’s so effective, AIM anglers have reporting catching the same fish the next day. C-R-R IS the future of tournament fishing. Be a part of it.

Try it once. You’ll be hooked. So many anglers have said they’ll never go back to catch-keep events.

AIM is the most lucrative economical walleye tournament series you can fish. Entry fees are set to be affordable so anyone can enter. Tournaments are on both rivers and lakes, so whatever your preferred presentation, you’re all set. Sign up next spring at AIM’s Facebook page.

Meanwhile, keep following that page for all the action from beautiful Lake Sakakawea this weekend. Just go to the AIM website, aimfishing.com, for details on how to compete in 2023.  We’re ready for you. Now it’s your turn.