One Fish….One Fish; But The Right One Takes AIM

You remember the rhyme, one fish, two fish? Well, it coulda stopped at one for Daren and Heide Schneider of Bismarck, who won the 2022 season-opening North Dakota AIM Weekend Walleye Series Warrior Boats/Kovash Marine Open state qualifier on Sunday (May 22).

“One fish, but the right fish, is what it took for them to take $2,500 back home from this beautiful lake,” said Denny Fox, AIM national tournament director. “Like most of the field entered, water clarity played a role, but the Schneiders, also used the wind to their advantage, using an old trick that’s won many a pro tournament: playing on the lake’s east shore where the wind had pushed the bait, and fish. They found them and scored with a 9.35-pounder to take first, and those all-important Yamaha Team Of The Year points.”

Like other teams, Daren Schneider said they had trouble figuring out Lake Ashtabula, actually a drowned part of the Sheyenne River between two dams. The stained water due to a late spring in the plains didn’t help either during pre-fishing.

“We actually practiced Thursday, Friday and Saturday and never caught a walleye,” Daren said. “We tried jigging, pitching the grass, casting stick baits, trolling, pulling live bait. We tried covering all our options because nothing was working,” he said. They also tried looking for that elusive cleaner water, but, there was a problem there, too.

“We spent a lot of time trying to find some cleaner water, but all that was much cooler. So the days when you found some clarity it was definitely colder, and they just weren’t there. 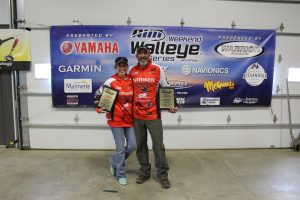 “On Saturday the sun was shining, and we both said we needed to figure something out. We thought that the wind had been blowing from west to east the last three days and we hadn’t fished the east shore. We found a nice mile or two stretch that we trolled. We started catching white bass, pike and smallmouth. The shoreline seemed like it should hold some walleye. We finished knowing that’s where we were going to start and keep grinding on that spot until something showed up,” he continued.

Sunday, they followed their plan, and interestingly they were the last boat to leave. That left them with a “net-minus,” in more ways than one.

“We actually lost both our nets on takeoff,” he added. “We managed to salvage one, and we went out. We only had about a two-mile run. The sun was shining. The wind was still trickling in and we kept changing baits, changing baits. We’d keep a couple running real shallow,” he said. Their lure of choice: custom-painted Walleye Nation Boogie Shad.

“One of our rods went off. I picked it up and told Heide that it’s a good fish. It took a long run and another,” he said, treating every fish they hooked as if it was the winning walleye. And, in this case, it was.

“Fortunately we were prepared and, that was our fish, a 28-1/4-incher. We had worked throughout the morning marking some fish and staying. There were definitely walleye marks, but we couldn’t get’em to go. We always say every time, somebody is going to find’em. We didn’t have a great day, but we had one that was darned good.

“We talked to half the field through practice and heard from the game warden. He’d known of only two walleyes caught from the previous weekend. So we knew one fish could win the darn thing, so going back we knew we didn’t zero. We could have a good points day and that took the pressure off for Devils Lake (AIM teams will be there for back-to-back tourneys July 9 and 10) because we suck at Devils,” Schneider laughed.

“We didn’t’ expect to win but thought we had some good points. This was Heide’s 15th AIM event and the first time ever, she was looking at not putting a fish on the card. If we couldn’t get five at least we got the good one, and to our surprise we were able to pull it off,” he added.

He was also wondering out loud if that would be good enough to earn the Navionics Big Fish Thursday prize.

“It was a very healthy, big, chunky fish. It was pretty awesome and boosted our outlook for the rest of the season to start with a win,” Schneider said

Finishing in second with 7.86 pounds, enough for $1,500, were Craig Kolden of Garrison and Shaeli Ekstein of Linton. They waited it out, and found that one fish to score, pitching jigs at the Ashtabula Bridge.

But first, Kolden wanted to post a special recognition for his partner. “I wanted to say one thing, that Shaeli is 36 weeks pregnant, and I was happy to have her wanting to be in this. She and I are fishing the series and share all expenses,” he said. 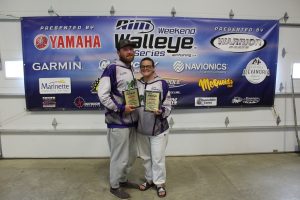 Kolden had pre-fished the lake about a month ago. And yup, the water was dirty, and yup, he didn’t catch a single fish. Prefishing, he upped the score with some nice smallmouth and a 13-inch bullhead he described as the biggest he’d seen, a regular dinosaur.

He said he likes fishing creeks, and usually does well. “But on this one the further I went up them, the water temperature kept dropping. Ashtabula also has a large channel, and you can tell this has really good potential but unfortunately this was a bad time. I had snow the last day of practice so obviously that didn’t make the bite any better. We knew we were going to have to fish pretty slow,” he added. “We used minnows on jigs and that’s how we caught our one. They were 1/8-ounce Owner football head jigs.”

He worried about using something too bright. Since their pre-fish luck was nearly nil, they decided to chuck it and go where they’d never been. Sunday, at the Ashtabula Bridge, they casted, and casted and casted, repeat that a few hundred times, and that’s what they did until about 11 a.m. with a bullhead, a bass and a pike to show.

“We picked up and moved, then decided to return, and within the first 29 minutes of being there we caught the big one, a 26-3/4-incher. If you stay at a spot long enough, something’s going to float through,” he said. “The weeds need to grow a bit on the lake and have a steady temperature. But it’s also a great destination for bass.”

Kolden said he and Ekstein will be fishing the entire North Dakota series this season, minus, no doubt perhaps, a few weeks off, including the state championship Aug. 27-27 on Lake Sak.

Here’s how the rest of the top five played out: In third place, with 6.98 pounds, good for $1,000, Jeremy Wentz, of Washburn, and Don Radke of Williston. Fourth place and $500 went to Shawn Hennings, Hillsboro, and Ben Blegen, Milaca, MN, who boated 6.67 pounds. Earning $300 for 6.46 pounds were Justin Sackenreuter of Fargo, and Cole Bieber of West Fargo. 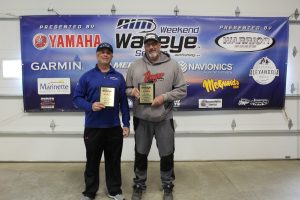 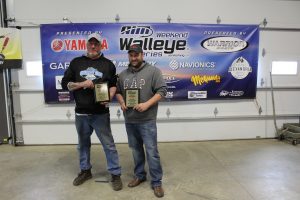 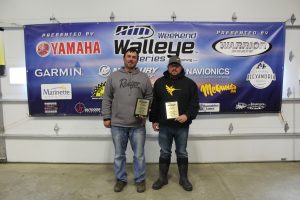 North Dakota, you’ve got until June 19 to re-rig, and register. That’s when AIM is back on it, at Lake Sakakawea at Parshall.

Now, what’s on the menu in about a week? Let’s think, hmmmm. Oh yeah.

The chance for nearly three dozen teams at that Warrior 1898DC, made only a few miles from where the June 3-4, 2022 National Championship Shootout will take place on Minnesota’s Lake Miltona, and where one of those teams will drive away with that Warrior, Yamaha 150, and Garmin electronics attached, more than $50,000 richer. We’ll have a preview of the event early next week.

Stay tuned to AIM’s Facebook page for more info from NoDak, and soon, a preview of the Shootout, and more on our great sponsors. Register for all events at AIM’s website.