They finished fifth at the 2021  AIM Weekend Walleye Series National Championship Shootout, and using that knowledge boosted Dylan Peotter and Anthony Englebert exactly five spots up the ladder Sunday to win at Lake Petenwell this time at the 2022 season’s third Wisconsin qualifier.

“These two ran the table because they knew a bit about where to find the fish in this cooler-than-usual spring, boating 29.64 pounds for $7,000, and an added $1,750 in side pot money,” said Denny Fox, AIM national tournament director. “They went trolling, and that did the trick.”

They prowled the trees, but decided that towing No. 5 Berkley Flicker Shads, some Shad Raps and No. 4 Salmo Hornets  behind Offshore planer boards brought it home, using their Garmin LiveScope electronics in the mix

Being at Lake Pete last year, Peotter said, “was definitely helpful. That fifth taught me a lot about the lake. The biggest part was, it was the exact same layout of weather. Water temps were lower, a heat wave came through that warmed it up so we had an idea on a pattern.”

They tried pitching lures at the trees during pre-fishing, hoping that the wood would warm up the water and attract fish. It didn’t.

“We were not as successful as we’d hoped. So we let the walleyes tell us what they wanted and with that ended up trolling. We trolled more than we had in many years, and trolling took the win,” he said. 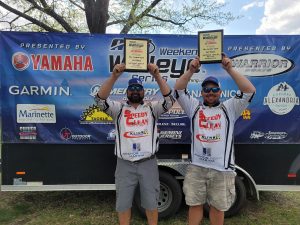 “Going in, we didn’t have a winning bag in mind. I basically fished the experience from the nationals. We had a couple nice fish the Saturday before we pre-fished,” but not much during.

When Fox released them Sunday, Peotter, from Kaukauna and Englebert, of Little Chute, sped north to near where the Wisconsin River, emptying from the upstream Nekoosa dam, formed Petenwell, right where they’d pre-fished.

“We used Number 5 Flicker Shads,” which caught the majority of their fish, he added. They also used those Salmos and Shad Raps.

“We focused on shallow water. The fish were in six feet or shallower. That seemed to be the key. I’m sure people caught bigger fish deeper. We had the right wind blowing in and wanted to hope that the fish were there like we thought, and it was a pleasant surprise,” he said.

That surprise began only 15 minutes of setting lines, with a double. “The first was a 23-1/2 and the second was much larger, and we lost it. At the end of that pass, we caught a 25-1/2, so we started on our first pass which was about 30 minutes long, and had two really nice fish,” Peotter described.

“We went back and made another, and I believe we caught a 26, so now we’re getting really happy. We made one more and got hooked up again. The fish actually went down and buried itself under a dead tree and we snapped off. I saw that tree later on side-imaging. We ended up that pass with a 24-3/4-incher.

“We ground that out until about noon and actually caught a 21-1/2 incher off a shallow hump after we extended our troll to see if the fish had moved,” he said. Now, everything on their card was over 21, and they decided to try two other spots they’d pinged. Nope. Wrong kinda fish.

“We hooked up with a really big catfish. The day prior, we had a 26 in that same area so we were excited we were going to get another big one but it ended up being a cat. After that we moved and tried our live bait program for the last hour. Using our LiveScope I could see the fish coming through the channel and onto the flat, but they were suspended, so I set a slip bobber to be over the treetops and cast every five minutes to get a drift over the trees. I got hooked up with a large fish, but I didn’t know what it was. It pulled the bait into the trees.

Then the boat talk began. “Anthony and I were talking, and he was optimistic. I said we’ve gotta have a top five weight. We would have been happy with 22 to 24 pounds.

“I added up the weight and was looking at it and then caught that 21-incher, and said ‘we’re just shy of 30 pounds,’ and that’s when we started getting pretty excited. We achieved our goal. I didn’t know there were that many big fish in there.”

A bit richer and with more points towards that Yamaha Team Of The Year chase, they’re also headed for this year’s Shootout on Minnesota’s Lake Miltona in a little more than two weeks.

“We’ll be there. I’ve never been there. I’ve only a couple of times pulled up a map. It looks and sounds like it should be a good time. It sounds like it’s kind of a fishery like Petenwell, so you’ll need about 30 pounds a day to do good. It should be exciting,” Peotter said.

Second-place finishers Matt Bootz of Wausau and Sam May of Crandon also headed up to the head of the lake, boating 27.55 pounds, good for $2,500 under Mercury 250 Pro XS power, with Garmin Panoptix LiveScope guiding them to the fish. They also didn’t do well finding bigs during pre-fishing, but when it came time Sunday, they lit’em up, May said.

“I don’t think we caught a fish over 18 inches pre-fishing, but we caught a lot. We believed there was a good pod that was moving down into the area we fished, which was the northern half of the lake where the river dumps in,” May said. They also used trolled Number 5 Flicker Shads.

“The first fish came on our second pass, a 24-1/2-incher, which is a good fish. For us, it didn’t come fast and furious. We did have our 27.5 pounds by noon which isn’t bad. Each fish took about an hour apart,” he said. They also stuck to the shallows like the winners. 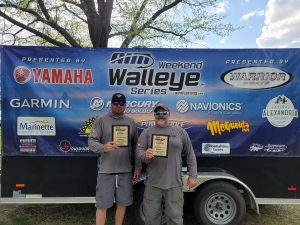 “I think that the bait fish young of the year were in there and the biggest thing is that the water changed 20 degrees in a week. We made a pass there Saturday and just lit’em up, so that’s where we went. Our partner boat caught a 22-incher in pre-fishing so that’s what told us there was going to be some fish hanging around,” he said.

May said he’s been fishing AIM since the series began. “I love it. The Catch-Record-Release™ format is great. The tournaments are run very professionally and as Denny said, it’s the most lucrative tournament in walleye fishing for the cost. We’ve made the National Championship for three years running, and the teams who fish it are all cool,” he said.

Here are the rest of the top rungs. Finishing third were Curt Stam and Adam Halder of Winneconne, winning $2,000 and second place side pot cash of $1,050. Fourth place went to Louie Apitz of Appleton and Josh Hietpas of Kaukauna, who boated 21.58 pounds and $1,500. In fifth with 20.50 pounds, good for $1,100, were Trevor Holzhueter of Juneau and Pete Hupf of Beaver Dam. An honorable mention goes to DJ Laux of Campbellsport and Max Wilson of Kewauskum, who finished 8th, good for $500 and an additional third place side pot cash of $700. 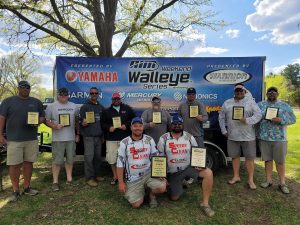 Wisconsin, we’re sorry to leave ya for about two months, but gotta go. We’re heading to North Dakota’s Lake Ashtabula Sunday, and we’ll have a preview for you, Fan Nation, on Friday. Then, you all know what’s coming June 3-4, right? You’d better. The AWWS Warrior Boats Yamaha Motor Corp National Championship Shootout is all, with that Warrior–Yamaha–Garmin package on the line.

Stay tuned to AIM’s Facebook page for more info from NoDak, and soon, a preview of the Shootout, and more on our great sponsors. Register for all events at AIM’s website.