“Huynh and Wolske came out of nowhere to win a tournament they entered almost on a whim when we first met them, and we had our eye on them from then on,” said Denny Fox, AIM national tournament director.  “Then they won AIM Yamaha Motor Corp USA Team Of The Year (TOY) in 2021, and now, they did it again. Unbelievable is how both we, and Huynh, are saying. And they put an exclamation point on this one, winning the Minnesota Championship at Duluth going away by 14.37 pounds, and assuring that title as well for these two phenoms two years in a row.”

Huynh had a little bit more to say regarding he and Wolske’s back-to-back TOY titles, and back-to-back Yamaha T9.9 four-stroke kicker motors. So let’s let Huynh do most of the talking here.

“After every single one of these (both tournament wins and TOY), I still don’t believe it. This one’s no different than the first. They’re all just equally the best experiences to me. We go in thinking yes, we want to win, but our fellow anglers and our friends, they can see that I’m stressed. I’m just not myself. They’re like, ‘you shouldn’t have any pressure, you’re fine, but now that’s where the pressure is. People have come to expect it, so that’s where my pressure is,” Huynh confided.

“Like on Saturday, we didn’t catch a fish for four or five hours, but they (eventual second place TOY placers Dylan Maki and Joe Bricko) had 31 pounds the day before. Looking in hindsight now, we caught a fish after five hours, and that one fish was really all we needed, but we didn’t know that on the water, in those big waves.

“The boat had two or three inches of water in the bottom and still our noses were to the grindstone. We felt noticeably angry. The way we were fishing, and conditions Saturday made it very, very hard. We just never let up,” he said. After their teamwork prevailed, he said, by 9:30 p.m. Saturday, he wasn’t celebrating. He was asleep, done.

“Our rundown this year, we had a fourth at Lake Mille Lacs. A second on Leech, a second on Vermillion, and our first here. Team Of The Year. It’s still new every time. To see how many people were noticing, social media followers and potential sponsors. I don’t reach out to them, but people are noticing who I never would have dreamt of.

“I always used to think, what would it be like to be that one who people watch you fish all the time. How would it feel to be KVD (Michiganian Kevin Van Dam, among his titles, seven-time BASS angler of the year) or (walleye great) Gary Parsons. That’s what it feels like now. To wrap my head around being that guy I wanted to be. I don’t take it for granted.

“I work as hard as I have to, to keep this going. If I can help another and they help me, that’s how it should work,” he continued. “I don’t ever want to be that guy, for example, you’re idling across the water, and we’re waving at someone in a wrapped boat, and they don’t wave back. I’ll never be that guy. It doesn’t pay to let any of this go to your head because I know where I came from.” 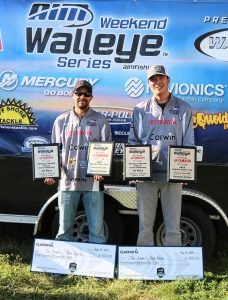 In his usually humble way, we asked him if he’d ever met KVD. “I have only met and talked to him as a fan and have been at the Bassmaster Classic just as an attendee. I would love to qualify for that.

I’d like to accomplish some other things and tournaments, but doing what we did Saturday, we almost feel like we have to go for three.”

Well there it is. With a potential third AIM Team Of The Year glinting in that late summer sun, let’s hope Huynh and Wolske do make time for AIM next season. We’re already looking forward to seeing their boat on the water when the 2023 Minnesota season begins and learn more about how they fish. Maybe, just maybe, we’ll also learn then about that “funny looking” bass lure they used to take the championship handily.

Fishing in second place were Dylan Maki of Cohasset and Joe Bricko of Farmington. Their Day Two didn’t work out, but they’re in the National Championship Shootout in their mercury 400 Verado, with Garmin in the mix.

After Day One of the Minnesota Championship, they were in second. Then their world blew apart, literally, with those wicked Lake Superior northeast winds. They pulled a rare zero on Day Two. They were jigging with reaction-style baits.

“It was an unbelievable tournament. We don’t get a lot of experience fishing the Great Lakes, so it was definitely an eye-opener. We did research on winds and how the water moves around with those winds, because we knew we’d be dealing with it,” Maki said. “We did follow the fish around and had a few areas that would pop but everything kind of moved and shifted with the winds.”

“We had a good pre-fish. Much of our teams pretty easily caught 40 pounds a day. The first day we went to one of our spots and they were there, and we put our bag together in a really small area. We got kind of nervous of the winds coming the next day so we left to pre-fish for Day Two and in hindsight we wished we’d have stayed there and gotten every ounce out of that spot. Day One, we anchored our bag with a 30-incher, an absolute Great Lakes beast,” he said.

Then the winds came on Day two.

“Huge winds. The waves were giants. Boats were disappearing between them, and that strong northeast wind blew in a pile of cold water. Some fish maybe moved shallower and some deeper. It effectively scattered the fish,” Maki said. “I think it took us until 11 or 12 before we finally got on some decent fish, and we just absolutely could not buy a bite. We did lose two that we fought less than five seconds. We still would have been quite a way behind for Team Of The Year. We went out and went for broke, and unfortunately, they threw us a curve ball and we thought it was a fastball, and we struck out.”

Let’s round out the top 10m places in the Yamaha Motor Corp USA team of the year standings.

Qualifying in third position, Tyler Wolden of Carlos, and Nate Leininger of Miltona. Fourth spot went to Keith Elza of Ashland and Bob Gould of Hermantown. Evan Rosemore of North Branch and Steven Rosemore of Cloquet are in the fifth qualifying spot. Jason Betzler of Princeton and Mike Christensen of Minneapolis, KS, hold down the sixth. Seventh seeded is Kody Seibert of Ramsey and Scott Seibert of Oak Grove.

In eighth, Phil Peterson of Anoka and Justin Osterbauer of Monticello. Ninth goes to Tim Juba and Brian Fenske of Alexandria, and in 10th , Scott MacKenzie of Big Lake and Girard Reinking of Hanover. 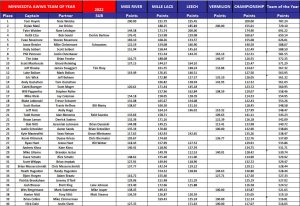 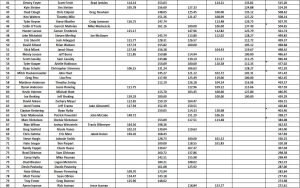 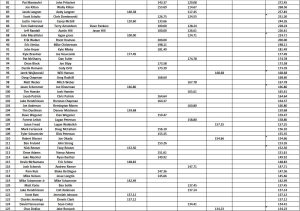 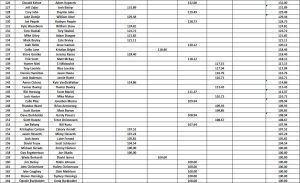 Hey you, Fan Nation. Yup you, you CAN do this. AIM is the most lucrative economical walleye tournament series, period. Be part of it. Watch for the 2023 schedule by October 1st with sign up starting January 15th 2023, and you can get all the info at AIM’s Facebook page.

Meanwhile, keep following that page for all the action from North Dakota’s beautiful Lake Sakakawea this weekend the final event of the 2022 AIM season. Just go to the AIM website, aimfishing.com, for details on how you can get in on this in 2023.