Two-thirds of a pound. That’s what separated the first-place team of Erik Walker and Brent Knutson from the third-place team at the AIM Weekend Walleye Series Warrior Boats/Highway 3 Marine Open Minnesota qualifier Sunday, (June 12), where Walker and Knutson earned $11,000 and those Yamaha Team Of The Year points to close ranks on the current leaders.

“The first and second skinny space was even thinner. Try a half-pound, Fan Nation. When you’re talking 35-plus pounds for a one-day event, that’s impressive to say the least,” said Denny Fox, AIM national tournament director. “Walker and Knutson not only won $9,000 in AIM cash. They added $2,000 in side pot money to get to that 11K total. Fifth place was only four pounds behind, and things could have broken totally another way as you’ll find out.”

Walker and Knutson had pre-fished since Wednesday in their Mercury 300 Pro XS-powered boat which had Garmin LiveScope aboard in the mix, and also fished a local tournament there Saturday.

“We had good fishing during pre-fish but didn’t do well Saturday. It was one of those days where we were missing fish and breaking off, so we cruised around to find some new fish,” Walker said. That they did in a weed/rock area on the lake’s south half, and with the go-to Mille Lacs setup, bobbers and leeches.

On Sunday, he said, “we caught fish right away. The first cast we had a 21-incher and then a couple of 23s, and then after that, things went dry and we had to go into search mode. We have a milk run of spots on the lake we’ve had over the years,” so those were next, spotting fish using side-imaging.

“There was a ton of 20 and 21-inchers and we caught a few of those. We did put a couple of 25-3/4-inchers after that fairly close together. We had a 28 in the afternoon right before the rain came through and that pretty much shut down everything for us. We spotted that fish and were extremely happy to see how long that was. We were happy with our 25s and that 28, they’re hard to come by anymore,” Walker continued. That made them feel pretty good.

“Another upgrade would have been nice. We weren’t super confident because obviously there were going to be some big bags. We decided to go in early and double check our photos, and we were happy with our day especially after having such a bad day before,” he said. 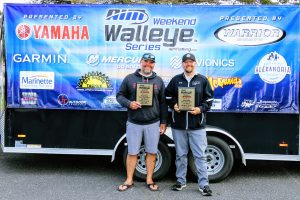 Then came the little scare.

“After we got in someone said, ‘who’s boat 40, Denny needs to talk to you.’ He called us in the back and he (director Denny Fox) had our photo, and our card where we wrote down a 23-3/4-inch fish. As they anxiously waited, he compared it with the photo. Turns out, everything matched, thanks to AIM’s Catch-Record-ReleaseÔ system.

“Then we heard that the Mike Christensen team (eventual third-place winners) had a 29-incher. We felt we had Max (Wilson, who finished second) by a little bit, and then we started feeling pretty happy,” Walker said.

Now, Minnesota, don’t worry about this team for the rest of the season. Due to family and scheduling conflicts, this was their only AIM event in 2022. Next year, they hope to do more.

In second place by just a half-pound were Max Wilson of Campbellsport, WI, and Travis Billmeyer of Faribault, MN. They came back to the dock with 35.33 pounds, earning $3,500, plus $1,200 in side pot cash. Wilson guides on Mille Lacs and was pretty busy leading up to Sunday.

He fished another tournament series at midweek, arriving at Isle at 2 a.m. Saturday, then ran a double guide trip that day, but on Sunday he saved the best, fishing a different area and using his Garmin LiveScope to pick out individual fish in an area where others who may not have had that distinct electronics advantage were catching smaller ones nearby.

Reached on the water on yet another guide trip, Wilson said they also nailed their fish with leeches.

“I knew they’re there (in the spot on the lake’s east side), it’s just a matter of if they’d bite,” he said. And, they did, on leeches and slip bobbers. He won’t say where exactly he found’em, but sounds like it was a popular location, considering how many other boats he said were near. But they took a while to get at first.

“It took a while to get bit, and we snapped off a couple of fish. We were doing terrible at first, but we kept grinding the area. We didn’t have a winner until around 9. Our first 26-1/2-incher was our second fish. We caught our first around 7:40-ish but we didn’t end up weighing it,” Wilson said. The next one, they did.

And if you can do a quick calculation, it sounds like they were only a half-hour from the start at the Mac’s Twin Bay’s launch, a little further from AIM headquarters at McQuoid’s Inn.

“We then picked away at them, upgrading a quarter-inch at a time. It wasn’t until the last hour that we had our 25 and two 26s, and with the last cast, we got our last 26-incher,” he said.

There was a small pod of fish that a group of boats were concentrating on. Problem is, they were much smaller than the roamers Wilson and others were seeing on their LiveScope just outside of that pod. They concentrated on six to 15 feet of water, but Wilson doesn’t pay attention to depths much.

“I just drive around until I see them on LiveScope. The program I do is slow and methodical. You can only go like a half-mile-an hour and go at different angles to see the fish. It was nice because it gave us the entire area to fish. They (the other boats) saw them (the fish), perhaps they didn’t know what sizes. I know what a big fish looks like on LiveScope when you see enough of them,” he said. 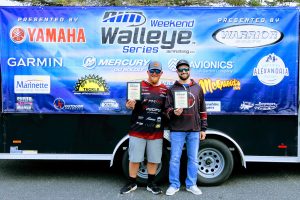 Wilson said that when that last 26 came into the boat, they knew they had a chance. They were disappointed in being so close to first place. But, that’s fishing.

“Especially to lose that close. The winners were right by me,” he said. “It was a bittersweet feeling to get beat by my own program and in my spot. It’s the second time I let myself believe we won and we didn’t. I did think we had it. We had about 33 pounds before that and when that last 26 hit, I told Travis, dude, game on, I think we did it, but….”

Funny thing about that last 26, he said. Fifth-place finishers Dylan Maki of Cohasset, MN, and Joe Bricko of Farmington were fishing nearby. “They hooked up with a jig, and snapped off and when I caught that 26, it had a jig and line hanging out of its mouth. When we came in, they told me that they had snapped off that exact fish, so if they had caught the fish,” he said, they might just have traded places. Instead, Maki and Bricko, who earned $1,300 for 31.70 pounds, for fifth.

Here’s the rest of the top five: in third, Eric Nesius of West Fargo, ND, and Mike Christensen of Minneapolis, KS, went home with $2,800 and third place side pot money of $800, for 35.24 pounds. In fourth, yesssss, was the dynamic duo and 2022 AIM National Championship Shootout winners Tom Huynh from Moorhead, MN, and Nate Wolske of Boy River. They added $1,400 to their AIM winnings, plus more TOY points, with 32.97 pounds. 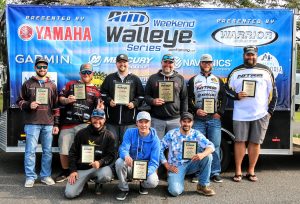 Okay, Minnesota, you’re on summer break until mid-July, when you continue the 2022 race to the TOY and the state championship at Leech Lake. Attention, Fan Nation and North Dakota, your turn this Sunday, when AIM visits Lake Sakakawea at Parshall, which by then just might be receiving the first of the unprecedented flood waters now scouring its largest feeder tributary, the Yellowstone River. Will a massive lake rise result for the event and possibly the rest of the year? We’ll have a preview later this week.