Go ‘All In,’ Take Day One With Bobbers

“Day One, the team of Tanner Ouelette and Kade Lynch of Mandan took first and $3,000 with 26.20 pounds using one of the oldest methods in the book,” said Denny Fox, AIM national tournament director. “On Day Two, the Warrior Boats/Pure Powersports Open, they almost did it again, but fell a few pounds short. But for this report, we’ll concentrate on their win.”

The pair’s pre-fish didn’t go exactly to plan, Ouelette said, so on Saturday, they took off in their Mercury 250 Pro XS-powered boat with at least a whole lotta water eliminated, and then choose wisely to give the lake’s east side a try.

“We had a couple of tips on certain places that had decent fish, so we kinda went all in and assumed that 40 pounds would win it. We got 26, and it just ended up winning because it was a tough bite,” Ouelette said. He called slip bobbers one of the most effective way to fish Devils. They did it in about 15 feet of water.

“We were in deep timber, moving in slowly and you’ve got to really train your eye to see what a big fish looks like on your electronics, so we moved around and casted only to big fish. Our first was a 23-1/2. We caught about 20 around the 22 to 23-inch mark,” he said. That included their next carded ‘eyes, which included a 22, and at mid-day, a 26-3/4-incher that did the job. They left that area with five good fish on the card around 1 p.m. 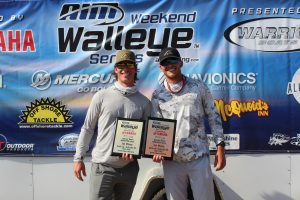 “We were worried that we were going to beat up on all the 22-inchers and wanted to make sure we left them there so we could get a full card the next day,” he said. “We didn’t think we’d won it because it was a tough bite. We thought it was going to be enough for a top three or five. There’s been a lot of rain here lately and with all that water rising, the fishing has been a little more tough. We just knew it from talking to people,” he continued.

Having two qualifiers on the same weekend is a huge deal when it comes to points for North Dakota Yamaha Team Of The Year standings. Where’s that win put them? We’ll see in the next report.

Meanwhile, on their tail were eventual second-place finishers on Day One, Alex Reslock of Devils Lake, and Jordan Omlie of Lankin. They actually went by Ouelette and Lynch and were surprised they were where they were. They ended Day One with 24.89 pounds, good for a $2,000 check.

“I actually drove by them six times. They were sitting about 50 yards from where I wanted to fish. So we did a milk run to about five different spots,” Reslock said. They ended up about a mile to two away from the winners. They started casting crank baits, and then switched to, yup, slip bobbers with leeches, in about six feet of water.

An experienced angler on Devils—he guides there—he also says that’s the way to catch’em, right along the weed edges where they were on Day One. “We popped a couple there and then went to where we ended up fishing on Day Two, and popped two more there. Their fish were mostly in the 21- to 22-inch range, except for the 24-1/2 and about a 23-1/2 hooked in the last hour.

“I would say we were never confident because we had five or six spots to go around. We stopped at a spot going toward Tanner because we figured there’d be more people there that day. I’ve never seen anybody fish where Tanner was. There’s a bite window out there and if you get one, you usually get fish. It’s knowing how the lake fishes at those spots,” he added. 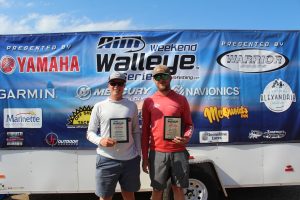 That knowledge and that spot helped Reslock and Omlie do a flip-flop with Tanner and Lynch on Day Two. More on that in the next installment of the Double At Devils as well. 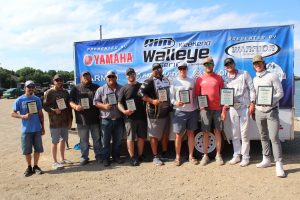 Our next report will highlight Day Two at Devils. This week ain’t over till it is. Because coming up is the sold-out event Sunday on Leech Lake from Horseshoe Bay Lodge in Walker. All you need to do to get in on any remaining AIM tournament is fill out the paperwork at AIM’s website. Become part of the walleye fishing’s most lucrative affordable walleye series. Time to be there!