Who Is Eligible, And TOY Points (Hint: Think Baseball)

The qualifier events for the 2022 AIM Weekend Walleye Series in Wisconsin, Minnesota and North Dakota are over. Now, the state championships begin. We thought it the right time to tell competitors and you, Fan Nation, how the championship teams are determined, and how AIM’s three Team Of The Year (TOY) winners get there.

“We decided at the outset that the way other tournaments keep track of points throughout the season doesn’t really tell the story,”Said Denny Fox, AIM national tournament director. “So here’s a primer on how we do it, which we believe is the most equitable way to determine what team in Wisconsin, Minnesota and North Dakota gets to boast about that award. To give you a hint, just think, ‘baseball,’” Fox said.

Baseball? Yup, baseball, he said. Here’s what he means. In major league baseball, who wins the batting championship is not determined strictly by how many home runs someone hits. It’s determined by that player’s overall performance average. It’s roughly the same with AIM’s TOY points standings, Fox explained.

“In the tournament world, in most series, points are always based on the position you finished. If you got first, you got X amount. The second-place team got one point less. Third, two points less, and so on,” Fox said.

“We at AIM felt it wasn’t really fair to people who won by a lot of pounds to have the second-place team, for example, be just one point behind them in Team Of The Year.

“For a long time, many pro anglers have been looking for a ‘batting average’ style of determining standings. Thus, we came up with our system of handing out points.

“Our points are figured on your percentage against the winning weight posted for each tournament. So if the winning weight was 10 pounds, for example, and your total was five pounds, you’d have 50 percent of the winning weight. You’d then receive 50 points. AIM goes all the way out to the hundredth of a point, because weights can be extremely tight, so points can get really tight,” Fox said.

“Our way is more complicated than just counting down places, but it’s more precise. Is it really fair for a second-place team to come in with 199 points? We just never felt that was the real way to do it. Just getting points for the place that you finish in isn’t the right way to do this,” Fox added.

In Minnesota, for example, after four events, you’ve also got four numbers, one for each event. After four events this year, one team is winning, Tom Huynh and Nate Wolske, with 759.77 points. The second-place team of Dylan Maki and Joe Bricko is at 674.09,” he continued. 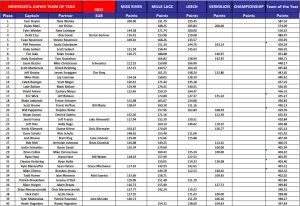 Now, here’s the difference, and what makes AIM events so fair, Fox said.

“What our teams are able to do is, they throw out the tournament they did poorest in. To make Team of The Year, they’ll count the three best of their four qualifiers. So when I remove the lowest tournament average for each of those two teams, Tom Huynh and Nate Wolske are still leading with 587.24 points. But, Dylan Maki and Joe Bricko have inched up, to 574.09. Going into the championship at Duluth on Aug. 19 and 20, they’re now only 13 points behind the leaders. That’s not much, and that’s what will make the championship there extremely interesting. Even the current third-place TOY team is right in there.

So, as baseball great Casey Stengel is quoted as saying, it ain’t over till it’s over, Fox said. One stumble from anyone at the championship could change everything. 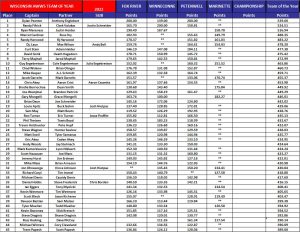 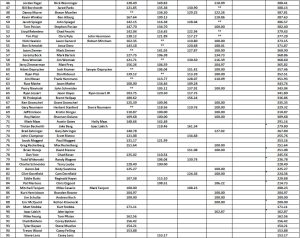 “The teams will add their finish at the championship to their current amount from the three best qualifiers to see who wins that Yamaha T9.9 Kicker motor,” he added.

“AIM believes that to hand out points against the qualifier winner’s score is more equitable for everybody. It’s the fair way to get points,” he said.

Now, onto what it means and how teams make the National Championship Shootout, coming up next spring, at a water body to be announced later.

“Everyone has a chance at going to the nationals even if a team didn’t catch a fish all season. From each division, we take 10 teams to the Shootout. Out of those 10, the top five placing teams at the championship are given a berth” Fox said. “The other way to get there is to end up in the top five in Team Of The Year points.

Now if you’ve earned a spot in both, here’s where you can still get in, he said.

“If you’ve earned a spot in both, you are awarded your state championship finish for your spot at the Nationals. Then, to fill the 5 Team of the Year spots, we go down in Team of The Year standings to do whatever it takes to fill the Shootout. In one year, we had four teams that took two spots, so even if you ended in ninth place at the end of the season, you were going to the Shootout,” Fox said. “AIM has been doing it this way since the first season in 2014. It’s the most fair and equitable way to run a tournament series.” 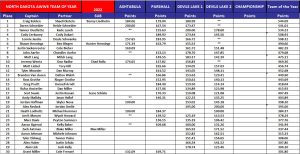 Stay tuned. The result of all the pre-season planning, by both AIM and our team partners. It all comes to a head starting Aug. 12 and ending in ND on the 27TH. We’re still having fun. Just go to the AIM website, aimfishing.com, for details on how you can get in on it.