Fears that a burgeoning alewife population would dampen the appetites of those big Bay of Green Bay walleyes didn’t phase the top teams of the AIM Weekend Walleye Series Wisconsin Division Navionics Open Sunday, July 10, as the bags of both the first and second-place teams each topped 30 pounds.

“Those alewives that the Bay of Green Bay’s walleyes have been chewing up didn’t stop our teams from posting great weights all the way down the line.” said Denny Fox, AIM national tournament director. “Those impressive totals include winners Eric McQuoid of Isle and partner Kolton Krawiecki of Pillager MN. If Eric’s last name sounds familiar, it is. He’s part of the family that owned McQuoid’s Inn and Mac’s Twin Bay Resort of Isle, MN, site most recently of another AIM qualifier on Minnesota’s Lake Mille Lacs.”

How’d McQuoid/Krawiecki jump into the fray at Marinette? They were there for another tournament this week, and figured they’d enter what would be the only AIM event they could fish this year because of other obligations. And doing so netted them $7,500, plus $1,900 in side pot cash, with their 37.46-pound total. And they did it in their Mercury 400 Verado-powered and Garmin-equipped boat where so many on the bay have struck out this year due to the alewives: south, and in the mud. We let’em off the hook on about where that “south” was, since they are in another event there this week.

“For pre-fishing, we basically went north for a couple days and never found a whole lot there, so we went south and played around there. They cooperated for the tournament Sunday,” McQuoid said. “it’s been tough there lately with all the alewives.”

“Basically, we just trolled through them and found spots where there weren’t as many balls of bait. We were trolling with our Offshore boards and pulling the new Acme spinners,” he added, using around five or six different colors throughout the day.

“We started off with the first pass and five minutes into it we had a 27-1/4. And probably 20 minutes later came our 30-1/4,” he said. Yup, that probably means that despite the plentiful live bait, walleye still liked spinners. 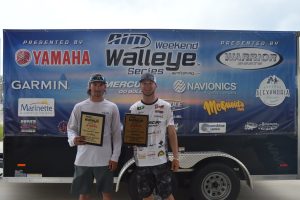 “We had a couple other smaller ones and a couple 20-inchers that we upgraded. We lost another good one we wished we could have seen,” he said. “I was just surprised. It was one of those days and it all came together at the right time,” McQuoid said. And, he added, it’s also nice to throw back all those big ones, thanks to AIM’s Catch-Record-ReleaseÔ format.

Finishing in second place with 30.82 pounds, good for $2,900, were long-time anglers Gary Mongelli and his wife, Grace, of Suamico. The Mongellis have a truly special story to tell. Grace has been diagnosed with Stage 4 lung cancer that has now involved her brain, liver and bones. Gary said it was all Grace’s idea that they compete.

“So, this year I came home from being gone for a couple of days, and Grace said, ‘I’m spending some money. I just signed us up for AIM and a couple of others,” he said. “I wasn’t expecting that with us not doing much fishing, if any, and she’s hung in there. We won our first ever event two weeks ago, our very first one, on Lake Winnebago,” he said.

“We didn’t fish Petenwell and we’ll be fishing the championship on Winnebago,” Grace promised. “We’re taking it one day at a time. Do what you can. Get up and do it and be thankful for each day and each fish you get,” she added. That outlook certainly worked well on Green Bay.

In fact, she was instrumental in their second place showing, which they earned by going rogue and ditching their crank baits for crawler harnesses and bottom bouncers, deciding to switch on tournament morning.

“What we were doing all week pre-fishing is our forte, crank baits, a lot of Flicker Shads and Flicker Minnows, and in four days we never caught a walleye,” Gary said. 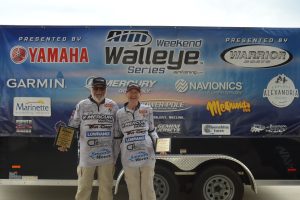 “The third and fourth was caught by me, and the fifth, a 22, was caught by Grace. It was a real team effort. Then I told her, now it’s your turn to catch the kicker, a 27 or 28 would really help us. She did it in our first tournament, but this year it was that 22,” he said.

In their first AIM tournament this year on the Fox River, they finished eighth, and Grace says they look forward to keeping up the pace on Winnebago. “I have a lot of people praying for me, I can definitely feel it,” she said. See you on Lake W, on Aug. 13, Grace.

Rounding out the top five were Brodie Berriochoa of Columbus, WI, and Dean Smith of Mareilles, Ill. They finished in third with 28.41 pounds, good for $2,200. In fourth was Jacob Garrelts of Niagara, WI and Mark Garrelts of Armstrong Creek, earning $1,500 for 26.50 pounds. Fifth went to Isaac Lakich of Richfield and Jake LaPine of Oshkosh. They went home with $1,200 and $1,140 in side pot cash for 23.55 pounds. Honorable mention in sixth and $1,100 plus $760 in side pot cash went to Randy and RJ Harwood, both of Oshkosh, for landing 22.86 pounds. 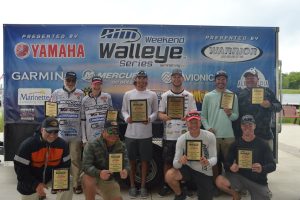 Okay, Fan Nation, stay tuned, because the week’s far from over. Next up, we’ve got the hows, wheres and with whats coming from last weekend’s North Dakota twofer, and a preview of coming attractions on Leech Lake, where AIM will next convene on this Sunday, July 17, with a full 100-boat field. There is 1 qualifying event left for 2022 in the Minnesota division waiting for you to get on your computers and check in with an entry at AIM’s website. Become part of the most lucrative affordable walleye series there is. Time to be there!