Nearly $400 a pound. That’s how much 20.69 pounds of walleye earned Randy Fifrick and Clark Valukas when they challenged the wind and went home with $8,000 and a win in the AIM Weekend Walleye Series  Garmin Open Wisconsin division qualifier on Sunday, April 24.

“They fought the wind and won this time in Lake Winnebago, where they found a protected spot and cashed in,” said Denny Fox, AIM national tournament director. “And they did it in a Warrior V1800, with Garmin LiveScope in the electronics array.

They headed for ‘bago after two days of bleak pre-fishing, Fifrick said. They tried from the big lake up to Fremont on the Wolf River.

“I’m not a good Wolf River fisherman. I know my strengths and that’s trolling and we wanted to find a bite like that,” he said. That meant Winnebago for them.

“We got in two days of pre-fishing and by noon Saturday we hadn’t caught a walleye, but ended up finding two 20-inchers on Winnebago. We knew they were good quality for the system so that was our plan, troll for some good-size fish,” Fifrick said. Their go-to lures? Salmos and Flicker Shads towed on Offshore planer boards. They’d tucked into an area mostly out of the winds that challenged the 90-boat field all day Sunday, in five to 12 feet of water, somewhere south of Oshkosh. That’s all he’d say.

“There were areas a little more protected from that southwest wind. We figured we knew there were fish there from the past, we just didn’t know there would be the caliber we found. It’s a good spot at different times of the year, said Fifrick, who’s been on the lake oh, more than a few times in his life. 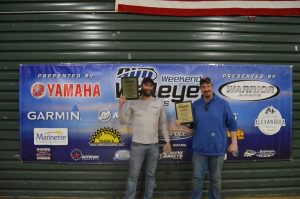 “We got out there and it wasn’t fast and furious. On our second pass we picked up an 18-incher, but still a good quality fish,” he said. Then the fish hit the pause button until two hours later, when they got another, a 24-incher.

“It looked like a sheepshead first and that significantly helped us and raised our spirits. The next pass we ended up getting a 25-1/2 which was very significant. We figured we had about 14 pounds. We had about an hour left, and we got another 24-3/4 in a different spot. That felt really good,” he said.

“That gave us our fourth fish, and we only ended up with four. I did the math and our three biggest would have been enough to win most tournaments here. It was pretty windy out there and it put the Warrior to the test. We got back fine with 20 to 30 mph winds and gusts over that. It was sporty coming across Lake Butte des Morts,” he said.

They arrived in time to fish a few minutes for that fifth on the card in the Winneconne area, but he said, it just didn’t happen.

“Anytime you have 20 pounds in a tournament here you feel good, but all it takes is one other boat to catch just a little more. You’re always thinking, is everybody else catching big fish too.

“The wind was definitely something we talked about all week, how it would affect the current and what areas will be a little more protected, where you’re going to be able to efficiently fish. Sunday it wasn’t so much the wind, but the giant gusts that would blow you around. Keeping all your lines in place was one of the big challenges,” he added.

Count on the pair to be at Petenwell on May 15. “We’ve been fishing AIM for five or seven years and haven’t missed a tournament in a while, so we’re excited to get to Petenwell,” Fifrick said.

Finishing second was the team of Phil Theisen of Auburndale, and Travis Boyd of White Lake. They started out by throwing out their plan to jig in Lake Winneconne and went rockin’ and rollin’ in Lake Poygan instead, Theisen said. That decision netted them $3,200, plus $1,800 in side pot cash, and Yamaha Team Of The Year points.

“We got out there right away (they were the 19th boat), and found it was even more windy than it was supposed to be, so we went to Poygan trolling,” he said. Trolling with Flicker Shads and Flicker Minnows in their Mercury 200 Pro XS-powered (he’s on the pro team, along with Theisen Custom Baits, among others), and with Garmin LiveScope among the electronics.

One would think the opposite with the way the wind was blowing up the channel. That tale comes next, after they landed a 25-3/4-incher about a half-hour into their first pass.  Then reality set in on their second, mid-lake. 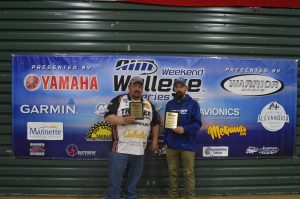 “It was windy. Waves were white-capping. It was pretty nasty. We didn’t catch another fish and made a decision to go into the river. We’ve never fished the Wolf before,” Theisen said. There were other boats in the area. Some were three-way rigging, some pulling flies, an area favorite technique.

“The first spot we dropped into, Travis caught a 23-3/4-incher on a jig and minnow,” Theisen said. Except for that first fish, they pulled all their weight vertical jigging. Boyd fished while Theisen kept the boat controlled in the wind and waves.

“The fish were four hours apart. Then we figured we just had to fill our card. We caught two more, then wanted to give ourselves time to get back,” he said. He was right. Driving into the face of the waves, they made it to Winneconne, and caught their last, right where some years ago, Michigan-based pro Mark Martin had almost won an AIM event, right at the bridge. This one was an 18-1/4-incher.

Next up for Wisconsin is Petenwell on Sunday, May 15. “I’ve never fished it, and I’m excited to try. It’s going to be fishing a lot of wood I hear. I’m anxious to get out there and break it down,” Theisen said.

Rounding out the next spots were Joseph Schneider of Van Dyne and Brian Daun of Stockbridge with 14.91 pounds, earning them $2,500 and second-place side pot cash of $1,080. In fourth place were Ryan Mereness of Appleton and Justin Heider of Oshkosh, who finished with 14 pounds even, good for $1,400. Fifth went to Joe Westphal and Brandon Paitrick of Beaver Dam. They landed 12.04 pounds and $1,300. An honorable mention went to Steve Lenz of Weyauwega and Casey Lenz of Appleton, who went home with $1,200 and third place in the side pot, for another $780. 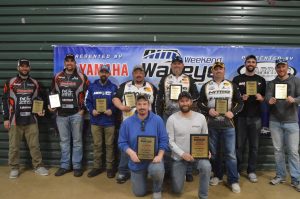 Between now and the next tourney at the site of last year’s AIM National Championship Shootout, stay tuned for some neat news about what our sponsors have been up to over the winter. There’s some pretty cool stuff to talk about.

Hopefully, Fan Nation, it won’t be as bumpy as the Winneconne system. But, you never know. It took jigs and minnows to take the championship on Petenwell. But that was June. We’ll see what may do it in May.

Stay tuned to AIM’s Facebook page for more info on upcoming events, and register for all events at AIM’s website.