“Ross and his 12-year-old son Roger, instead of 15-year-old Reid this time, did it slow-trolling with chubs, just like it was predicted in our preview,” said Denny Fox, AIM national tournament director.  “This win will send them to the National Championship Shootout in early June 2023 and a shot at a Warrior 1898 DC that’s powered by a 150 Yamaha, with Garmin electronics aboard, worth a cool $50K-plus.

“That will sound a mite familiar to team Grothe, as they already are running a Warrior 208, powered by a Yamaha 300, and next season, they’ll have Garmin LiveScope aboard. This year, however, that combo means that they not only won $4,000 from AIM. They’ll also get $1,000 in Yamaha Power Pay, plus another $1,000 in Warrior cash for their win, meaning Lake Sak provided them with $6,000 for two days of fun,” Fox added.

Grothe said that since he’d competed in a tournament last weekend at the north end of Sakakawea, and “did pretty well,” he spent pre-fishing scoping out other areas just in case.

But it was everyone’s fave go-to spot, the Van Hook Arm, that came through again for them despite a good chop on the 45-mile ride going back on Friday. It took about 50 minutes to get there that morning, and 90 to get back, Grothe said. Saturday was a better ride and they went even farther.

During pre-fishing, he said, “I began to realize where we fished is the community hole that was the potential winning spot in the Van Hook Arm. I kinda made up my mind that’s probably where I’m going to fish if the weather was conducive. I didn’t pre-fish up there but did spend time closer to the blast-off area just to cover my bases if the weather wasn’t good. We found some decent areas but nothing with the confidence that we had” in the Van Hook area.

On Day One, Team Grothe headed to Van Hook, and proceeded to gang up on some walleyes there with AIM’s Catch-Record-ReleaseÔ format. 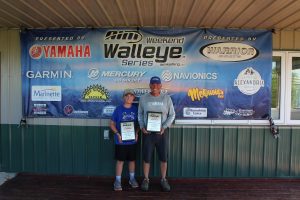 “We proceeded to catch 37 pounds and change Friday (37.48 pounds to be exact). It was a day to remember. We can use two rods each in North Dakota, and our first two fish were a little smaller,” he said. But then Roger came through. “He doubled up on two 27-inch fish with creek chubs. We were just fishing some structure alongside the river channel, a sunken island, dragging around bait on a slip sinker with a plain hook and targeting fish with my electronics and staying away from the crowds who fish that area,” Grothe continued. “We weighed five on our card. We had two over 27, two over 26 and a 24-plus-inch fish. Out of our weigh fish, Roger caught four of the five.”

Because of the winds, they left early to ensure getting back on time. “We decided to drop in and fish one last spot and upgraded a 19-incher to a 26. In the last half-hour, we went from 31 to 37 pounds. I felt really confident that after being out there enough in the last two years that we would be competitive with that type of weight and the caliber of fish we had. I didn’t know we’d be leading by seven pounds or more (actually 7.65 pounds).

“I told Roger after, ‘it’s ours to lose now. We’ve gotta go out and try to win this. We don’t need any more participation trophies, and with a 12-year-old competing with his dad, it’s pretty exhilarating,” he said.

On Day Two, they headed across the lake again to their spot, and found they had company. Another tournament was taking place Saturday. “It put substantially more pressure on that area, so by 9:45 we had not boated a fish, so we decided to vacate and go for greener pastures. That meant another 40 miles upstream. Total return trip to the launch now, nearly 80 miles.

Using the same presentation there, they filled their card, including a 24-1/2 anchor fish. He was shopping for a 20-pound bag. They came close, with 18.31 pounds, but would it be enough to seal the deal? They headed back to try a spot near Hazen, and then anxiously came in.

With their win, they ended fifth in Team Of The Year competition, and that double enabled another state team to slip into a Championship Shootout berth.

The Grothe family moved to North Dakota from Minnesota two years ago, so he’s anxious where the 2023 Shootout will take place. As for Roger?

“He was ecstatic. He’s really a good angler and tries really hard. Roger’s comparing himself to his brother’s two tournament wins and Team Of The Year, and having the championship and the camaraderie and participating with his dad” can’t be beat for both. “We split the winnings. That’s something he can utilize later in life. It’s been a good year. We were also at the David A. Andersen Memorial Shootout (an annual event for Warrior Boat owners on Minnesota’s Lake of the Woods), so we won the adult-youth division, so he won $500 there. These are some great memories that are made on the water, and we’re looking forward to creating more.”

Finishing in second place were the North Dakota 2022 Yamaha Motor Corp. USA Team Of The Year Craig Kolden and fiancé Shaeli Ekstein of Garrison, on the banks of said Lake Sakakawea, but on the east end. They were reached on their “rest day” after his fifth day on the water and her fourth. They’d put close to 200 miles on the boat in the two days of the event. Two hundred miles of bouncing over the waves. Two days of sun and casting and looking and worries over ‘should we try this or that spot,’ and wondering if they were right. So don’t tell us that these teams aren’t athletes. Nope.

Kolden said they also headed to Van Hook Arm both days, even though they’re “easters,” meaning which side of the lake they’re familiar with.

“We pre-fished the east side and it didn’t work. We had a good spot. On Day One, we knew there were fish there. And on our first pass, we caught all five of our fish,” Kolden said. They were using jigs, mostly custom-painted Jigging Raps from DH Custom Baits of Bismarck. 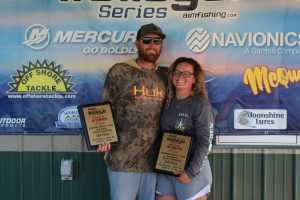 “Luckily the weather worked out because on this lake if the wind blows a little bit too much it makes it hard to get back. The last time we were on Sakakawea it was calm all day but on a normal day it’s 20 mph winds. That’s why we have big boats. Most important is a big fuel tank. We have a 55-gallon tank,” he said. And yup, in all that water, they were jigging.

“Shaeli was using a dark rap and I was using a white. They both worked well. Usually the white glow caught the bigger ones,” he said.

Day Two, repeat. Go to the same place. Problem. “We went to Van Hook and it didn’t work out,” he said. They did a full pass, nothing. The second pass, nothing. They stayed until 11:15, had one close to the boat that came unzipped. They were marking fish but couldn’t connect. Time to revise the plan.

“We went to Plan B, closer to McKenzie Bay,” he said, which is just around the corner from Van Hook. “Plan B was a spot Shaeli and I had never fished. We found it on our last day of practice,” he said. Then came the fact that they’d never had a “Plan B” until they talked about keeping that one in their pocket. During practice, they’d found it and caught a 27-1/2 and a 21 in practice and a ton of eaters.

“And as soon as we got there, we started getting fish left and right, in 38 to 41 feet. She caught most of them on the Jigging Rap,” he said.

“I caught the 27-3/4 and a 21-1/2, and the rest were around 20 inches. We sat there for a couple hours and then headed back. If it wasn’t for that spot, we would have had a tough day,” Kolden said. “It’s been multiple times where we’ve found our best spot on the day before a tournament. It’s always worth challenging yourself. If you’re fishing memories all the time, it’ll end up haunting you. One thing on Sakakawea is, follow the old channel. Anytime it runs up against the shore, it’s a spot worth checking out.”

“Anytime we get over 20 pounds on Sakakawea we’re happy,” Shaeli said.

“The wind was slowly changing, and it ended up being glass calm. But we knew it was going to be a tough day for a lot of teams. That’s this time of year on Sakakawea. It can go one way or another,” Kolden added. They ended with 22.26 pounds, and a total of 52.09 pounds, good for second place, $2,000 and that coveted Yamaha Motor Corp. North Dakota Team Of The Year title, plus a golden ticket to the AIM National Championship Shootout.

“None of this could have ever happened without my partners,” Kolden said. To clarify, Shaeli took some time off from the water with the birth of their daughter, Amity, and in stepped fellow Garrison resident Ben Leidholm, who fished Devils Lake with Kolden.

Rounding out the rest of the AIM North Dakota Championship Top Five, in third place with 45.23 pounds and $1,500 richer, Matthew Liebel of Williston and Tory Hill of Minot. Fourth place was secured by Scot Swain of Minot and Justin Kossan of Mandan, who carded 42.10 pounds, good for $1,000. Daren and Heide Schneider of Bismarck landed fifth place with 40.61 pounds, winning $500. They added another $500 from Garmin for being the highest finisher using Garmin electronics at the event. We’ll have our Team Of The Year tell you, Fan Nation, how they did it posted here in a bit. 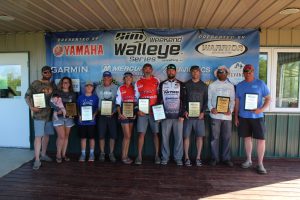 This was the final AIM event of the 2022 season, which ended as it began: lots of bigs landed, lots of fun, great memories, and all the fish caught returned to the water to produce even more walleye that all anglers can enjoy for years to come. That’s the difference between AIM and other catch-and-keep tournaments, that in our opinion, are “old-fashioned.” Even obsolete. These large walleyes are precious, because they carry the future of fishing.

They’re the ones that ensure a healthy population continues for future generations, including young anglers like Roger and Reid Grothe, Amity Kolden and eventually their children as well. No spawning fish means no future fish. And, Fan Nation, we’re certain that you know what no future fish means. That is the reason AIM exists. To promote fishing, and fishing’s future, and protecting this precious cool water resource.

You can help by joining us in 2023 both as teams and fans, by supporting your favorites. AIM is the most lucrative economical walleye tournament series, period. Be part of it, whether you’re a river or lake angler. Sign up next spring at AIM’s Facebook page.

Meanwhile, keep following that page for all the action from beautiful Lake Sakakawea this weekend. Just go to the AIM website, aimfishing.com, for details on how you can get in on this in 2023.