We won’t hold you in suspense any longer for this, Fan Nation.

Here are, by state, your teams qualifying in both order of finish at each state championship, and in Team Of The Year Points, for the 2023 AIM Weekend Walleye Series National Championship Shootout.

“In early August, we told you how we award Yamaha Motor Corp USA Team Of The Year (TOY) points, and also touched on how those who double-qualify in both TOY and at the championship are counted, and because of that double qualification, then how AIM moves up others from the TOY roster, who then make the National Shootout,” said Denny Fox, AIM national tournament director. “Teams who qualify in the championship are going. If they also qualify in TOY, their championship finish takes precedence, and next team below in TOY moves up to qualify. And as we pointed out then, using this extremely fair system, any team has a chance to qualify for the Shootout.”

“Well, here’s the proof. Here by state are your teams, starting with Wisconsin,” Fox said. Remember, this is how each team finished for both the State Championship, and TOY. Those names in bold qualify for the Shootout by their TOY standings.” 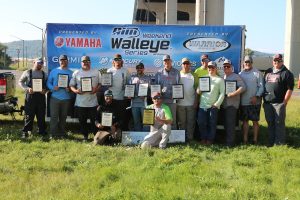 “As you can see, we have quite a few double qualifiers, so this bears repeating so we’re clear. If you double, you’ll qualify by virtue of your top five championship spot and go to the Shootout. For the TOY qualifiers, we’ll then go down the TOY standings to fill in that spot to end up with 30 teams, 10 from each division, five from the championship, five from Team Of The Year.

“This is why when you fish a circuit like AIM, you never take your foot off the throttle. Literally, less than one point all season long made the difference between a team going and a team staying home,” Fox explained.

AIM is the most lucrative economical walleye tournament series you can fish. Anyone can enter. Tournaments are on both rivers and lakes, so whatever your preferred presentation, you’re all set.

Meanwhile, keep following that page. Just go to the AIM website, aimfishing.com, for details on how to compete in 2023.  We’re ready for you. Now it’s your turn.