It’s uncanny. That’s about all you can say. Well, maybe not. But the same team that has won four events since 2020, including the 2021 state championship, bested yet another field of great anglers to seal the deal on the unseasonably cold water in the AIM Weekend Walleye Series Warrior Boats/The Boat Center Open and Minnesota qualifier opener, this time on the cold Mississippi River out of Hager City, WI.

“There’s this line in the baseball book by Bernard Malamud and the movie of the same name that many of you out there in Fan Nation may know,” said Denny Fox, AIM national tournament director. “It’s from ‘The Natural.’ It goes like this: “Home runs, triples, singles…Anything he wants to hit, he hits. I’ve never seen anything like it. It’s incredible.’ That just about wraps up what is happening with Team Tom Huynh and Nate Wolske.

“Even Huynh can’t explain it. And it is incredible, what these two continue to do, winning three out of their last four AIM Minnesota events, especially this one, considering that Huynh admits he’s unfamiliar with fishing rivers. But, here’s how the hottest team in AIM did it again, this time taking $8,000, plus $1,850 in side pot cash.”

Huynh, from Moorehead, and Wolske, from Boy River, throttled up their Mercury 300 Pro XS, and pointed their Garmin electronics into Pool 4. But first, not very successfully during pre-fishing.

“Rivers aren’t my thing. The first time we ever fished a river was last year. Learning current and all that is a whole new thing,” Huynh admitted. “We can’t do on a river what we do on a lake. So basically, this tournament, we just fished.”

For them, pre-fishing weather was, in Huynh’s words, terrible. “Windy, snowing and water temperatures between 35 and 38. There were a couple of days when we didn’t catch a fish. A couple of days, we caught a couple. 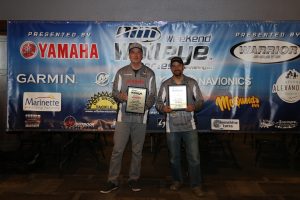 “The day before the tournament, we were sitting there and Nate said, this’ll be a good one just to get behind us. How it’d be nice to finish in the top 30 or 40,” he continued.

Then one pre-fish morning, it turned a little sunny, just like one angler interviewed for the preview, and the eventual second-place team below said that it would matter.

Huynh was on a phone call and looked up for a moment at some riprap rock. “The water was fairly calm and fishing for bass (he’s a former bass tournament angler), we look for shad, and I saw some small fish and said, is that a shad?

They went through a cut in that riprap big enough for a boat to squeeze through. He casted a jerk bait, and accidentally snagged one of those little fish. It indeed was a shad.

“I said, ok, they’re here. The water temperature there was right below 40. The rocks were warming it up. So Saturday, I told Nate that if the water temp on Sunday was 40 we’re going to that spot to check. He was like, okay, whatever,” Huynh chuckled.

Sunday morning, it was sunny. Not much debris, and a normal current. They’d found the answer.

“Within 90 minutes I dragged my little plastic down those rocks and then when it hit the current, I let the current take it and bounce down, tick, tick, tick. And when it was bouncing there was a feeling, something that hit it. I’d set the hook and a couple times it was in a rock, and a few were the right walleye bites.

“We were able to get more fish in a little over an hour than we did in our entire pre-fish. We had five fish on the card within an hour and one was a 28-1/2-incher,” Huynh said.

Now, what did he feel trigger them to hit? A bass bait called a white crawfish scented plastic by Bizz Baits. They also used a carbon blade tungsten blade bait by SPRO. Makes a different sound than lead, and another new bait to try, to spur a reaction bite, he said.

Then things changed on the river, he said. “We looked upstream and there were trees coming down. I think I saw a refrigerator come by. They had opened the gates and the water level was rising, the wind picked up from the southeast and it blew out that spot.” They continued another 45 minutes, then moved to that only spot where they’d caught walleye during pre-fishing.

“We spent some time on this little stretch and there wasn’t another tournament boat there, but one did come and he sat right behind us, watching, then he left. We’d caught only one walleye,” he said, that wouldn’t have helped their card. Then with only a little time left before they had to run, Wolske connects. A 29-1/2-incher.

“It was just crazy. And we started thinking we have a good basket,” but the second guessing also kicked in. They were newbies on the river, against a bunch of really good “river rat” anglers. Who knows what kind of weights they’d bring? Maybe 40 pounds. Maybe 45. They were guesstimating they had maybe 25 or so. They were also guesstimating they’d be in the top 20, maybe top 10.

But when Denny Fox began going through the numbers, Huynh said, their spirits began to rise. Maybe they had a chance. Turns out, did they did, big time.

So, what the heck is going on here? Why are they winning so much? Your guess is as good as theirs, Huynh said.

“I don’t know what to think about it. Nate for example is very technical, so he looks at different techniques. He hasn’t been in the fishing game that long, so we make a really good team. People might think it’s our Garmin LiveScope. I’m using it all the time, but if I caught every fish I saw I’d never cash a check.

“I’m looking for structure that holds big fish so I’m always trying to win. I think we’re approaching this a little differently. We know the techniques traditional walleye fishermen use and were just making it a little different.

“I’m using a white plastic crawdad-looking bait. But if a wounded shad is getting caught in the current and it’s falling down the river, a craw with a flatter body and with pinchers would displace more water and look like a wounded shad. The one shad I caught by accident was very silver, almost white. I think it was a reaction bite, where they get a glimpse and eat it. They don’t have time to look at it,” he theorizes.

Whatever it is, whatever they’re doing, they hope to continue throughout the season. The upcoming visit to Leech in July, he said, is a question mark. He’s fishing other walleye tournaments this year as well.

“So with Leech (they also won that last year), the pressure is on, but we can only get a half-day to pre-fish it,” he said.

That means perhaps, someone else will be standing at the top rung of the podium. Or, maybe not.

In second place were Kyle Brantner and Joe Newcomb of Pepin. They scored 24.93 pounds for $2,500 and $1,110 in side pot cash in a borrowed boat powered by a 150 Yamaha. The Mississippi in this area’s their home water.

“We pre-fished Friday and Saturday and knew the water was coming up fast. We figured the fish wouldn’t be holding, so we were just going to go fishing. Friday we had a decent day Dubuque rigging,” Brantner said.

“We were just trying to find some deeper fish holding on the current seams. Saturday was a crappy day. We only caught three.”

They stayed in Pool 4 Sunday.

“We didn’t want to fish with others at the dam. There was probably a minimum of 100 boats up there between locals and the tournament,” he said, so they started out Dubuque rigging,

“We made three passes over some fish, and they didn’t go, and we actually just went fishing and went shallow because the last two days it was warm. We started pitching blades and plastics and on the second or third cast Joe hooked a big one, probably an upper 20s, and it got off,” he said. Two or three more casts later, their first came aboard, a 22-3/4-inch fish, on a blade bait, cast upriver at a 45-degree angle and bounced down in the current.

“It was basically the only way we could get a bite out of them. We got a bunch of lower 20-inch fish and lost a few bigger ones because it was so windy. We just ground out a decent bag.” All except another, that is.

“Ninety-five percent of our fish were on blades. When you’re lifting them, the slower you can lift it the better. We knew we were probably in the money. We were thinking about 30 pounds would win it.” 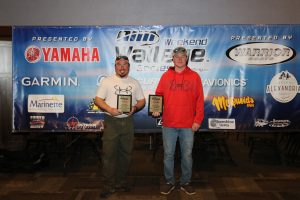 Brantner finished second in the last AIM Quest For The Best, and he plans to fish nearly all AIM qualifiers this season. So, watch out for these two as well. 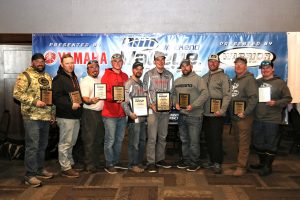 Minnesota, you’re on spring break now until June 12, when AIM gets back on the water at Lake Mille Lacs. North Dakota and Wisconsin, heads up for a double-header, Sunday, April 24, on the Missouri River at Bismarck, and for Wisconsin, on the Wolf River system out of Winneconne. Get registered for those if you haven’t already.

Meantime, we’ll be detailing what’s happening at some of our sponsors, including the newest to join the AIM team.

To teams who are still sitting on the sidelines: You can’t win anything unless you register and climb aboard the AIM train, the most lucrative affordable series going.

Go to AIM’s Facebook page to check us out, then register at AIM’s website to get in on the next tournaments. You know you want to. You know you can.