Days before the 2022 AIM Weekend Walleye Series Garmin/Navionics State Championship on Lake Winnebago, a couple of teams predicted that if you came in with 14 pounds a day, you’d be sitting pretty. One said that trolling would take it. Another, that it’d be possibly won on the lake’s reefs. The guesstimates were on the money, literally, because winners Dylan Peotter and Anthony Englebert took it all with 29.38 pounds, trolling over specific rock piles all over the lake.

“Anytime you’ve got a pair of anglers who grew up fishing a lake and know where to go when the wind misbehaves like it did on Day Two, count them in as a potential winner, and that’s what they did, taking home $9,000, another $1,350 in side-pot cash, and they also rang the bell on Garmin Rewards cash for another $500,” said Denny Fox, AIM national tournament director. “Way to go guys. Now, how’d you do it again?”

“We were targeting rocks adjacent to the mud, or the deep water,” he began. We were pulling crawlers along the edges of the reefs. We had a few spots north, a few on the east shore and a few south of the launch and we utilized them all. We fished a lot of spots to be honest, pre-fishing, because we knew we really wanted to achieve Team Of The Year, so we put in some extra time.”

How much? How about starting Saturday, from around 6:30 a.m. to 6:30 p.m. at night and a couple there until dark. We fished the entire lake,” Peotter said. 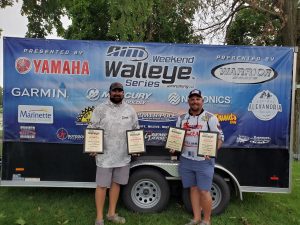 “We spent every day that we pre-fished on every end of that lake. And that allowed us to have fishable spots no matter what, with confidence that there were fish in the area.”

“We typically like to do a lot of casting on structure, and we noticed that most of our artificial baits weren’t catching the amount we typically catch. So we started using jigs and crawlers,” he said. Still not productive to win.  So they switched to trolling with five boards and with Englebert casting off the bow.

They tapped the knowledge of their friends, some of whom were fishing against them. “We were talking a little with the top five teams and they were all doing the same thing,” and one or two mentioned changing tactics, which may have been the turning point.

Okay, let’s troll over to Day One, Friday.

“We started off going north. Anthony’s comfort zone is the north end and when I say north, literally from just north of the launch along the north shore. That’s where we grew up and learned how to fish. We’d stumbled across a spot Thursday about 4:30 or 5 that ended up being a very key spot for Day One,” he said. But starting out, first spot, nothing. Second spot, they caught 14- to 16-inchers. Then that third spot, the one they found Thursday, was the one.

“We’d tripled up, three on all at once. They were small in pre-fish, and on tournament day we wound up with a 23 and a 19. It was somewhere around 9:30 or 10. We had three on the card and we doubled up again, but they weren’t anything of any size. We jumped around and kept upgrading, and we had two 18s, two 19s and that 23-incher. Throughout the day we just kept upgrading. We needed the full day to do it. And that’s how we ended up with our 15-1/2 pounds,” he said. Well, close. It was 15.55 pounds. Good enough to be in second place to a team that had landed 18-plus. And they knew that going against some of the best teams in walleye-dom, that was a lot to make up, especially on Winnebago.

Day Two, both knew that wind was going to be a factor. In fact, they found themselves at one point trying to troll in four-footers.

“We still thought we’d try up north. We got to our spot where we caught the 19 and 23 and put out two drift socks to slow us down. We could get the boat slowed to about .9 mph, but we were drifting sideways,” he said, so those socks helped stabilize things.

“We made a pass over it but didn’t catch anything and decided to head to the east shore. It was very fishable,” he said, unlike the north they’d left. Just the same, that trip that normally would take probably 10 or so took 40 minutes. But it was worth it.

“We instantly started catching fish. On our second pass, we got a couple of 19s, the third another, and the fourth pass we picked up a 19 and an 18-plus. We were the only ones there and we felt we caught what we could. We decided to head to our south spots,” he said, but they didn’t produce.

They never caught an upgrade the rest of the day. They ended with 13.83 pounds, and they figured it wouldn’t be nearly enough to win.

“We knew that with the wind it could either turn the fish on or it would be too windy and be tough to fish. With those factors, we were shooting for a goal of 12 pounds a day. We felt all we would catch 10 or 12, and we were very happy to see 13.8 on Day Two and very happy to see 15-1/2 Day one,” Peotter said.

They headed back towards the launch to make sure they’d make it back and so nothing would go wrong. “We end up just casting close to the takeoff point,” he said.

“One of those things was that we felt like there was a possibility we had a good chance at the top five. But we knew there are so many good teams, and one that are very good on this lake, that anything could happen.

“People talk and you start to hear some weights and you really get worried. And to be honest, the only time we knew, and we were smiling was when they called out the third place. We were in suspense the whole time. We were biting nails waiting for the results,” he said. They’d done it. Clinched not only first place, but Team Of The Year (more on that in a separate news release in a bit).

The second-place team of Tyler Mueller and father Todd, both of Appleton, took home $4,000, thanks to 28.60 pounds of ‘eyes. They did it in their V208 Warrior, with Garmin in the mix, meaning they’ve got more cash coming their way from Warrior.

They were fourth after Day One, so they moved up handily.

“I didn’t get to pre-fish much,” Tyler Mueller said. “I was in South Dakota and only got to fish with my dad for a half-day Thursday. We fished a few hours and found some good fish on the rocks on the south side of the lake.” Those rocks, he said, were dumped into Winnebago by conservation group Walleyes For Tomorrow, and that structure in spots around the lake was where they concentrated their firepower for both days.

“Dad actually fished during the week and had a good bite going, so we checked a couple of those, and we fished some of the memories we had of Winnebago, and the fish happened to be on those spots as well. Most of the areas was in the south tip of the lake. 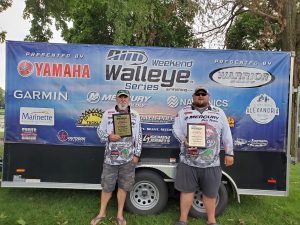 “We had some fish during the week on the east shore, so we had 10 or 12 spots that we’d catch fish,” Mueller continued.

On Day one, they started pitching jigs and crawlers and throwing out a slip bobber on those reefs. “We probably caught 10 fish all day. Right away we had a 15- or 16-incher and as the day progressed, every bite we got seemed to be a good one, and slowly but surely we put our card together. We had 14 pounds by around 1:30, all just casting, and the slip bobber actually took a fish or two, too,” he said.

“We spent the rest of Day One trying some new areas and spots that Dad used to fish over the years to see if we could miraculously get a big one. Nope. They ended the day in striking distance with 14.2 pounds.

On Day Two, they did a two-peat, going to the same spots. But, a little glitch happened right off. They lost electric trolling motor power about 9:30 a.m.

“So we just kinda tried to find somewhere that was less rough, and actually ended up catching two good fish, a 19 and a 21-incher, and we lost another big one. But we don’t want to know whether it was a walleye because it might have won us the tournament,” he laughed. “I think we only caught less than 10 all day.”

Mueller said Day Two was a grind, just running from spot to spot, netting one here, another there. “I think we had a 17-incher then an 8 and change, and a 20 and a 21-incher. But we just couldn’t get rid of that 17. We didn’t know we’d get second, though, while in the morning battling three-footers over those reefs,” he said.

Going in, they were hoping for a top five and a berth at the championship in 2023. “Usually if you can match your Day One on a two-day tournament, you can move up. We started talking to other teams and found out that maybe we were sitting in the top three,” he said. Well, better than that, and he did it with his dad, for another bonus.

“A dream of mine was to win one with my dad, and taking second wasn’t a win, but it will be something I’ll never forget. It was pretty much a dream come true.”

The rest of the top five, who also qualified for next spring’s AIM National Championship Shootout, were: Third, with 27.56 pounds, $3,000 and a second-place side-pot of $810, went to Jeremy Hurst and Jim Erdman, both of Oshkosh. Fourth place, $2,000 and the third-place side-pot cash of $540 went to Randy and RJ Harwood, both also of Oshkosh.

In fifth, with $1,500 in their pockets, were Mike Kasper of Shiocton and AJ Schmidt of Fremont. They landed 26.19 pounds and that sought-after Shootout invite. 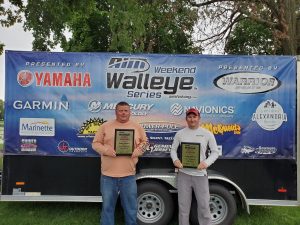 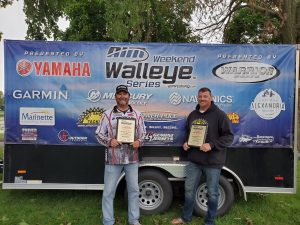 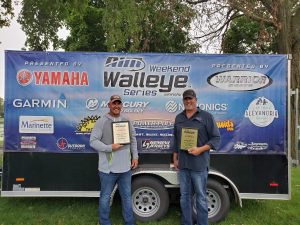 What a great season, and what a great finish to 2022. We’re already looking forward to 2023, when we’ll meet again on a cold late March or early April Sunday and do it all over again. Meantime, we know what you’re thinking. But have no doubt.

Yes, you DO have the skills to keep up with these teams. You can even sharpen your fishing skills even more by competing with them, and against them. That’s what you’ll find when fishing AIM. Sign up next spring when events open up at AIM’s Facebook page, and keep following the page for more fun at Minnesota’s state championship this weekend and North Dakota the next. It all starts again on Friday, and we’ll have a preview of that nail-biter Thursday. Just go to the AIM website, aimfishing.com, for details on how you can get in on it in 2023.