Shell Game: Sunken Island Gives It Up For Both First,

It may be, and probably is THE spot to go this time of year on Lake Sakakawea’s Van Hook Arm unless you go to another spot since it’s loaded with hungry walleye this year, and that sunken island brought home $4,000 for AWWS first-timer Ira Walter and partner Greg Mortensen at the AIM Weekend Walleye Series Warrior Boats/Pure Powersports Open qualifier in North Dakota Sunday, (June 19).

“Walter and Mortensen weren’t the only ones who knew where to go, as our second-place finishers Justin Krieger and Rick Ellingson were nearby and having the same amount of fun, but about 2.4 pounds less fun than the winners,” said Denny Fox, AIM national tournament director. “They report that the water was higher due to flooding upstream, and clarity wasn’t an issue.”

Walter, from Stanley, nearly due north from Parshall, and Mortensen, from New Town, slow-trolled creek chubs and Lindy rigs across the “sunken island,” part of which is out of the water right now, to get the win in their Mercury 400 Verado-powered boat. Because they did well at a tournament there the previous weekend, they figured they didn’t need to pre-fish, and they figured right.

“We figured the fishing would be going on Shell and we didn’t want to pull the big fish out of there before,” since Shell is no secret spot for anyone fishing the Arm. The water did come up by a foot or two since the previous week (due the Yellowstone floods), but the water clarity was the same. So we went out fishing with Greg’s kids, but not anywhere near where we went fishing Sunday,” he said, since “you can catch your limit right now 200 yards from the dock if you want.”

Sunday, they first went on the island’s west side with chubs pulled from .2 to .5 mph and had caught two smaller fish when the bite stopped.

“So there’s a spot where Greg caught some good fish in the middle of Shell Island, but we struck out, so we went to the east side,” Walter said. “I had a big fish on and lost it so we kept on going back and forth. There had to be 40 boats there and (Justin) Krieger and (Rick) Ellingson were right by us. 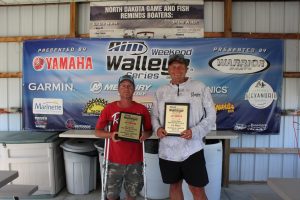 About 10 a.m., they scored, a 27-1/4-incher, one of four of their five that Mortensen hooked. After some 20-inchers that they did not record, then a 25-incher came to the net about 90 minutes later.

“We ended upgrading with another 23-1/4-incher probably around 2 p.m., on the edge of the mouth of Van Hook Arm. We never upgraded another,” Walter said. “We figured we were at least in the top five, maybe top 3. We knew that Krieger did well and the third-place team did so too.

“It was a great feeling to win. This was my first AIM tournament and Greg’s second or third. I like that you’re releasing all the big fish,” Walter said. This may be the only event Walter will be at this year, but their liking AIM’s Catch-Record-ReleaseÔ format means they’ll be back for sure.

Another team you won’t be seeing again this season, but definitely will in 2023 is that of Justin Krieger and Rick Ellingson of Williston, who took second place and $2,000 with 31.17 pounds caught and released. Their 2090 Warrior Backtroller, has a Merc 150 four-stroke at the transom.  As the winners said, they also were at Shell looking for a winner. And they shook hands with one, of sorts.

“Shell Island is no secret. I’ve been fishing here since I was a little kid,” Krieger said. And using creek chubs is about all you’ll see him with on Lake Sak. That’s a hint for all you trollers.

“It’s always what we use. We went straight to the east side of the island, jockeyed through a few boats, dropped our lines on the point and started backtrolling. Within the first 15 minutes we had a couple of 21s and then ground it out. We caught that 30-1/4 about noon.”

Wait, what? Yup, a 30-plus. That is sure to be in the running for Navionics Big Fish Thursday. Caught on chubs. Plural. 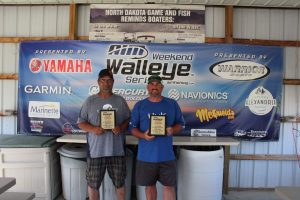 “It was probably the biggest walleye weight-wise I’ve ever caught. It was the healthiest 30-1/4-incher I’ve ever laid eyes on and it had both creek chubs in its gullet from my lines,” Krieger said.

“We popped the hook out and the other line was attached to the other rod, so it was hungry and ready to eat. We needed a 25-incher or a couple of 23s” to challenge to win, but it was not to be, he said.

The rest of the five big bags went like this:

In third were “The Codys,” Cody Cerkoney of Belfield, and Cody Dukart of Dunn Center. They earned $1,200 with 30.20 pounds. Fourth went to Greg Pruitt of and Darnell Arndt of Dickinson, with an $800, 28.34-pound bag. Heath Lodholtz and Michael Kummer of Watford City in fifth went home with $600 for 28.33 pounds.

Hey, Fan Nation, it appears we’re on break for The Fourth and the start of summer until around mid-July, when we re-convene with a triple-header the weekend of July 9 back here in North Dakota and also in Wisconsin.

Remember to stay tuned to the website for more “what’s news” news from our sponsors, and join AIM at an event.  You know you want to. You know you can.