The Lake Provides: Did AIM Teams Ever Catch The Fish

At Minnesota Qualifier On Leech? You Betcha

All we can say is, did Leech Lake ever provide, and did the teams fishing the AIM Weekend Walleye Series, Warrior Boats/Musky House Minnesota Division Open Sunday (July 17) ever beat’em up, with the top finishers Tyler Wolden and Nate Leininger bringing in 49 pounds even to take $9,000 and another $1,600 in side pot cash.

“What a performance by all our teams and the lake. The mayfly hatch obviously wasn’t an issue at all on a day that saw the big water calm to take the 100 teams wherever they wanted to go,” said Denny Fox, AIM national tournament director. “The top five placers came in with more than 200 pounds on their cards for a one-day event at Horseshoe Bay Lodge in Walker. It’s an amazing amount on an always amazing lake and from an amazing location, Horseshoe Bay Lodge.”

Wolden, of Carlos, and Leininger, of Miltona, were scoping out the lake since Thursday and they found some amazing fish” in Tyler’s words, on Nate’s Mercury-powered and Garmin LiveScope-equipped boat, with JT Outdoor Products rods aboard.

“Our first fish on the card in the morning was a 30-1/2-incher that came on a Jigging Rap in about 25 feet of water,” Wolden said. Then things went a bit south for a while.

“The rest of the morning, the fish went negative, and we struggled for a couple of hours to get the fish going again. In the afternoon, they turned back on, and it was time to make hay,” he said. They continued with some mid-20-inch fish at first.

“We ended up getting a 26-1/2 and a 27/3/4 from that afternoon bite window. We targeted them using a combination of live bait rigging and Jigging Raps. The fish were still belly to the bottom and we slow-pulled crawlers and leeches through them.

“We also mixed in some slip bobber fishing when they got a little more active. We did put some big minnows on but they didn’t really care for those,” Wolden said. Then things got interesting, and that eventually put them at the top, and in line for a Navionics Big Fish Thursday win. 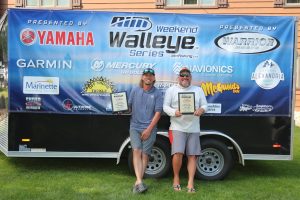 “An hour before we had to head back, we had a 10-minute battle with an absolute giant, a 31-1/2 Leech Lake monster. At that point we had right around 48 pounds for our fish and we contemplated heading in, but we wanted to upgrade a 26-inch fish. We ground out another 30 minutes and Nate set the hook on a 27-1/4-incher for another pound upgrade to put us at 49 even. What an absolute amazing day. It really feels good to pull a win out of Leach as we have been close a couple other times.”

Coming in, they were fairly confident, Wolden said, but on Leech, who knows when you’re on Leech.

“We knew there were others with big fish going. We got the right bites. We knew from the past that the biggest weights winning were around 44 pounds, and you’d have to believe you had it. We also knew that the second-place team was also great fishermen. We came to the conclusion that if someone beats 49 pounds, congrats, our hats are off to them.”

Which brings us to “that” team, the one of Tom Huynh (pronounced “win,” of course) of Moorehead and Nate Wolske of Boy River. You remember these two, right? They came in with 46.77 pounds, firmly in second, and winning $3,800 plus a $960 side pot in their Mercury 300 Pro XS and Garmin LiveScope-equipped boat. They basically said the same thing as Wolden/Leininger: If someone beats 46 pounds, good on’em.

“We’ve won with 38 and 40 pounds, and I didn’t get to pre-fish here. We know the lake well enough that we can run around but we had no idea the winners would be over 46 pounds,” Huynh said.

“We had a 26-1/4, then a 27-3/4, then a 28.5 and two 29-1/4 inches. We only caught seven fish all day. I think our smallest was 26 inches. We kept it very simple. We used my favorite color jigs with a combination of minnows, crawlers and leeches. We were using LiveScope not only to look for fish but more importantly, rocks and boulders they’d be living by. We’d pitch at those boulders and if there was a fish it’d come out and get the bait. When the bait would be within a couple feet, they’d show themselves,” Huynh explained. 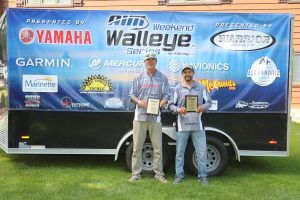 So what the heck’s the little trick he was tricking them with? “We like using search baits. Like on Miltona (site of the most recent National Championship Shootout, which they won), a lot of times we’d use a larger plastic swim bait to get them to pop out. Typically, the fish don’t usually bite those. We used them to get their attention, then we pitch something back to them that they will eat,” he said. Neat, eh?

Sunday’s conditions, Huynh said, were perfect. “When we added everything, we thought we were shooting for 40 pounds, and when we had 46, we told each other, that if somebody beats us, they deserve it. And that’s a big weight for Tyler and Nate. For those two guys to catch two over 30 inches on the same day, they should be super proud of that.”

Huynh figures that coming into the last qualifier, they’re sitting pretty for Yamaha Minnesota Division Team Of The Year points. If that holds, that title would add another to their amazing run. 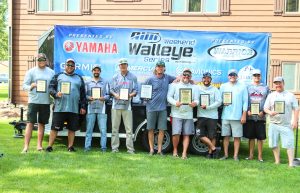 Okay, Fan Nation, one more qualifier for July, the 31st, on Minnesota’s Lake Vermilion, then it’s on to the last month, and the championships. It’s getting interesting, so stick around. And remember, all you teams who are still thinking of getting in. There’s still time to do just that. Just go to the AIM website, aimfishing.com, for details. Come join the party!