It All Comes Down To A Nail-Biter Of A Championship

Normally after an AIM Weekend Walleye Series state qualifier, we’d be telling you here about the winners and how they did it right off the get-go, but this time, Fan Nation, you’d better be pushing that hard reset button as we move to the championship, because Sunday’s (July 31) win by Dylan Maki and Joe Bricko at the Warrior Boats Open on Minnesota’s Lake Vermillion just changed everything going into Aug. 19 and 20 at Duluth.

“The win by Maki and Bricko with 46.01 pounds means that we’ve now got a totally different championship setting up that won’t be decided until the last fish is weighed at Duluth’s Mercury Marine Minnesota Division State Championship,” said Denny Fox, AIM national tournament director. “The fact that Maki and Bricko won going away means it’s anybody’s championship to win, and anybody’s Minnesota Yamaha Team Of The Year title to win. Stick around, Fan Nation, because this just got ‘reeely’ interesting. We’ll have more on how AIM figures those all-important TOY points, and how this one tournament result made things so close, in a few days. That’s the beauty of how AIM does it. Any one tournament can change an entire season, and any team has a chance.”

“Sunday, we just kinda dialed in a little more of a program and the kind of rocks they were liking,” Maki said. “It went from being a couple of random fish to kind of deciphering where they were.” As the preview story said, Vermilion’s bottom is literally one big rock pile. Its walleye love relating to that structure, and that’s where the pair found’em.

“It’s all rock and about two million pounds of lead from all the tackle lost out there,” added Maki, who’s from Cohasset. Bricko is from Farmington. It also helped that he could use their Garmin LiveScope to see them, as well as the muskies that roam the lake, and watch the walleye’s reaction when those monsters set up shop in the same rocks, and wait’em out. So, where’d they find these fish, including all those 29-nchers that sealed the win and a $7,000 check?

“We were on Lake Vermilion,” he laughed. More specific than that, please?  He did leak that they were about a 20-minute ride from the start at Fortune Bay Resort Casino near Tower, MN. But, their day didn’t start the way they’d hoped.

“We actually went to our first spot, which we were real confident of. There were a lot of fish there pre-fishing, and we went in hopes of putting together a mediocre bag,” to start, so they would at least have a full card, then go hunting. Problem was, fish weren’t home.

“We fished for a half-hour and decided to pull the plug. We went to spot Number Two, and on our first cast we popped a 24-incher, and on our second, we had a really big fish up to the boat and it spit the bait. If it was a walleye, it was a really big one,” he said.  They then took in a deep breath, settled down and settled in.

Now the action wasn’t one after another, and Maki suspects that the humongous muskie moving in and out periodically could have been the reason.

“There were real short bite windows and all of a sudden they’d get active. Every time you’d see muskies, the walleyes would hunker down into the rocks or vacate. It was kinda weird,” Maki said. “I know the muskies were super-active, so the presence of those big son of a guns could have had them hiding.” 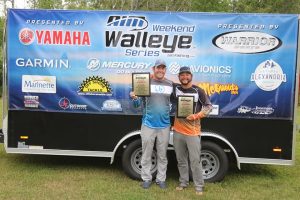 Well, not too weird when you’re a walleye and you’ve got a three-foot-long freshwater shark staring at you. He also attributed the walleye’s on-again-off-again feed to the water temperature. Due to all the rain, Vermilion was 10 degrees cooler than a month ago, and probably headed cooler yet with more rain in the area, he said.

“The fish also were in a little bit of a funk from the colder water. After the weigh-in, they got another three inches of rain so I’m sure the water cooled down more after that,” Maki added

So what’s their win, outshining that “other team” by more than 12-1/2 pounds, mean? Hang on. This was the pair’s first AIM win this year. AIM was here for a State Championship in the past, and they won it.

“So we’ve got two AIM wins under our belt. We’re going to be sitting about 15 points behind (Tom) Huynh and (Nate) Wolske, so it’s going to come down to the wire who takes home Team Of The Year. It would be an unbelievable accomplishment and it’s a surreal feeling to at least have a shot at it. Tom and Nate are unbelievable anglers, and this is the first time we’ve ever come out ahead of them. Fifteen points isn’t that much.”

Did we just hear the sound of a challenge being thrown down? “Wethinks” perhaps so, in a good way.

That of course brings us to Messer’s Huynh and Wolske, the former from Moorhead, and the latter from Boy River, in second with that 33.37-pound bag, good for $2,500 and first place in side pot cash of $1,200. Huynh said he never saw the winners in practice or on Sunday. They also were trying to figure out the fish.

“Our pre-fishing was fairly minimal. My stepdad came up and we did a lot of smallmouth fishing. I knew this could have been our ‘throwaway’ tournament (more on that in the next story on how AIM figures points), and we did spend a few hours trying to find big walleye. We thought we could probably have 25 pounds. Two days before, I hooked into a 31-incher, but it was too sporadic. So going into Sunday we were shooting for about 25 pounds,” Huynh said. And, he admitted, Vermilion’s big.

“It was our first time there and that place is intimidating. We also looked at the roster and there were people who’d been there multiple times, and sometimes that’s just hard to compete with,” he continued. “It’s not just so much the acreage, it’s the shoreline,” he added, all 290 miles of it. “This was the most running around we’ve done in a tournament, Nate and I.” So they were happy with their second-place. 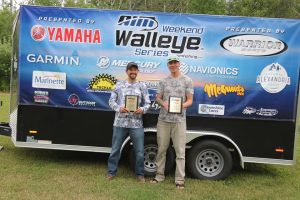 “We used this tournament to incorporate some ideas we’ve had throughout the year, so we said this would be our best chance to try some of this out. We’re happy with the new baits and new tactics,” he added.

“Leech Lake (where they also copped second) was a hard one, and we’re always happy with second place,” he said, adding they’ve got a lot of respect for Maki, Bricko and the rest of the field. “Looking at them on the water, we’re like, ‘we’ve gotta beat these guys.’

“Going into Superior, the points race has tightened significantly. We’re happy to be where we’re sitting, but Superior is out of mine and Nate’s comfort zone.”

There you go. Respect shown from both teams for each other, and the rest of AIM’s field of top competitors. We’ll see how this all plays out in about two weeks, when a different kind of fishery awaits teams in Duluth. Superior’s big water. In last year’s early August qualifier here, small crankbaits on lead core won it on the Wisconsin shoreline. We’ll see if the fish like that same combo, or whether something else will bring that win, and a 9.9 Yamaha four-stroke to boot, home. Stay tuned! 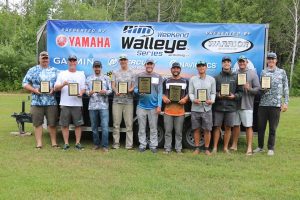 Get in on the fun, and improve your fishing skills along the way. Just go to the AIM website, aimfishing.com, for details on how you can sign up.